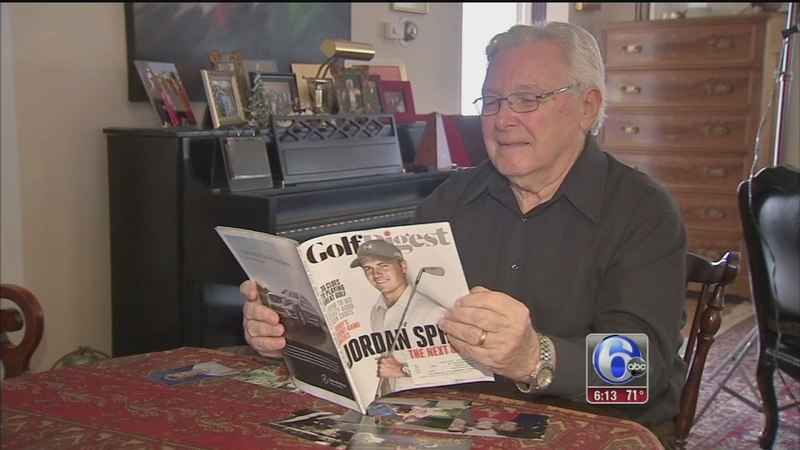 BETHLEHEM, Pa. (WPVI) -- While Jordan Spieth was born and raised in Dallas, Texas, his father grew up in Bethlehem, Pa and that's where his grandfather Donald still lives.

The 21-year-old put on a golfing clinic Sunday at the Masters becoming the youngest player to win the Masters since Tiger Woods and it happened just one year after he fell just short of winning at Augusta.

"You could tell right then when he came in second that he was already thinking about coming back, making his plans. He wasn't going to finish second the next year. That was going to be one of his big goals," Donald told Action News Monday afternoon.

The 73-year-old Spieth says it has always been that kind of drive that defines how his grandson approaches life and sports.

"He played baseball, basketball, soccer and all the things everybody does. When he was, I think 12, he decided that he was going to give up everything else and play golf," Donald said.

Once he made that commitment, the entire family rallied around Jordan.

In fact, Jordan's uncle Stow Spieth who works as a bartender in Narberth served as Jordan's caddy during the Masters last Wednesday.

Donald says that while the entire family is reveling in what happened yesterday, he could not be any prouder of his grandson.

"It's a given I am proud about how he played golf, but I'm so proud of him as a young man and how he's shown himself and his relationships to his family, to friends, to other professionals, to the press. He's just a good kid," Donald said.

Donald Spieth is a longtime conductor of the Lehigh Valley Chamber Orchestra.

Quite an impressive family.