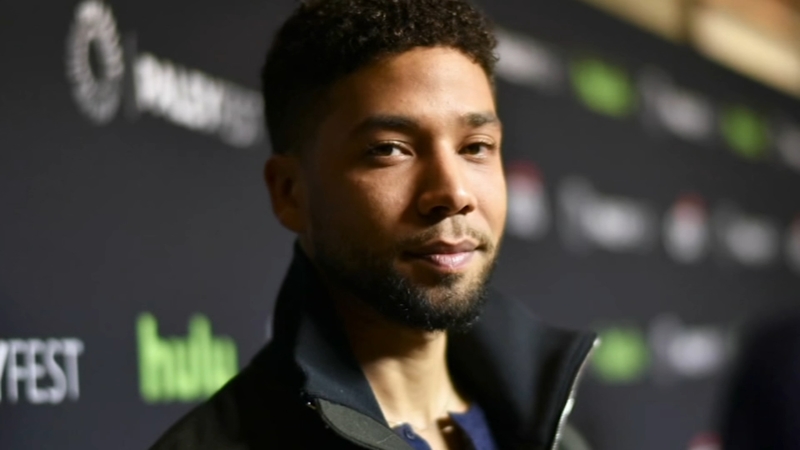 Smollett is due in court in Chicago at 1:30 p.m. Thursday. Chicago police spokesman Anthony Guglielmi said CPD detectives will make contact with Smollett's legal team to "negotiate a reasonable surrender for his arrest."

Smollett is not in custody at this time. Guglielmi told ABC News police are not actively looking for the actor because "this is not a violent crime," but said "the longer this goes, the more we have to do what we have to do."

Guglielmi told ABC News police do not know where Smollett is, and "his attorneys have not shared where he is at this point."

"I know this can be difficult emotionally, and we hope he doesn't do anything terrible. We want to make this as diplomatic as possible. In the end, this is only a class 4 felony. He will get through this and we want to make it as easy as possible for him to do it. But again, it is about accountability," Guglielmi told ABC News.

Twentieth Century Fox Television and Fox Entertainment said they have no comment at this time.

Smollett's attorneys, Todd Pugh and Victor Henderson, released a statement, saying, "Like any other citizen, Mr. Smollett enjoys the presumption of innocence, particularly when there has been an investigation like this one where information, both true and false, has been repeatedly leaked. Given these circumstances, we intend to conduct a thorough investigation and to mount an aggressive defense."

Employees at Beauty House in Chicago's Uptown neighborhood said the brothers came to the business the day before the alleged attack. The store is a little more than a mile from their apartment, and a security guard said he remembers the siblings because they purchased ski masks.

Chicago police confirmed the authenticity of the surveillance video, which shows the brothers purchasing numerous items, including a red ball cap, gloves, and ski masks.

Security guard Montago Silas said he was asked by the siblings if the store sold ski masks, but the business did not have the traditional balaclava-type mask; they only carried the kind with separate eyeholes. He thought it strange that they purchased them.

"It was bizarre because it was unusual for people to purchase these type of masks, not since the 70s, but I thought it was a little strange," Montago said.

The surveillance video also shows them leaving the store. They get into a silver-colored two-door coupe before driving away. Hours later, Smollett reported the alleged attack.

Montago said he's been keeping up with the Smollett story, but never thought he'd become a part of it.

The video does not show the siblings buying the rope that Smollett says was placed around his neck. That item, according to sources, came from a hardware store.

The attorney representing the Ousundairo brothers said her clients have been fully cooperating with the investigation and do not expect to be charged.

Smollett reported on Jan. 29 that he was attacked by two masked men who hurled racist and homophobic slurs at him, beat him, threw some type of chemical liquid on him, and looped a rope around his neck in Chicago's Streeterville neighborhood.

Two days after the alleged attack, Chicago police released surveillance images of two people they said they considered persons of interest in the attack. The pair were later identified as brothers and brought in for questioning.

A law enforcement source said the brothers allege Smollett paid them to orchestrate and stage the attack. The brothers said Smollett was upset that the threatening letter sent to Empire's Chicago studios didn't get enough attention.

Wednesday Gugliemi confirmed prosecutors are speaking with Jussie Smollett's attorneys as part of their investigation into an alleged attack on the "Empire" actor.

Guglielmi said he could not confirm reports that half a dozen subpoenas seeking Smollett's cell phone and bank records have been issued.

"The only tool for detectives to be able to corroborate information is a search warrant and a subpoena. I am not at liberty to discuss the specifics, but it is not uncommon for any detective or law enforcement to subpoena records," Guglielmi said.

Over the weekend Chicago police said they were "eager" to re-interview Smollett after releasing the two brothers without charges.

The FBI and the U.S. Postal Inspection Service are investigating the letter, which was sent to the Chicago studio for "Empire" on Jan. 22, and whether Smollett played a role in sending the letter, two federal officials confirmed to ABC News. The letter is currently in the FBI crime lab for analysis, according to one of those sources.

"Out of an abundance of caution, the decision to recuse herself was made to address potential questions of impartiality based upon familiarity with potential witnesses in the case," a spokeswoman told ABC News via email.

Foxx clarified her reasons Wednesday. The Cook County State's Attorney's Office released a statement that explained: "Shortly after the incident occurred in late January, State's Attorney Foxx had conversations with a family member of Jussie Smollett about the incident and their concerns, and facilitated a connection to the Chicago Police Department who were investigating the incident. Based on those prior conversations and out of an abundance of caution, last week State's Attorney Foxx decided to remove herself from the decision making in this matter and delegated it to her First Assistant Joseph Magats, a 28-year veteran prosecutor."

Paperwork from the Illinois Board of Elections shows Vic Henderson, one of the attorneys representing Smollett, gave $250 to Foxx's campaign in 2016, but it was not related to the recusal.

"Maybe I should have just recused myself from the difficult cases that came across my desk when I was State's Attorney. I was under the impression that when the voters elected me and I took my oath of office it meant I had to do my job."

Alvarez lost the March 2016 Democratic primary to Foxx, after fallout from the Laquan McDonald shooting investigation.

Last week, Smollett sat down with Good Morning America's Robin Roberts and spoke about the letter.

"Just because on the letter, it had a stick figure hanging from a tree with a gun pointing towards it with the words that said, 'Smollett, Jussie, you will die, black (expletive),'" Smollett said. "There was no address, but the return address said in big, red, you know, like caps, 'MAGA.' Did I make that up too?"

ABC7 Eyewitness News learned Tuesday that Smollett pleaded no contest to DUI, driving without a license and providing false information to law enforcement in Los Angeles in 2007. He was sentenced to two years of probation and either spent three days in jail or paid a fine of $100 for the three misdemeanor charges, according to the LA city attorney's office, though it's unclear which option he chose.