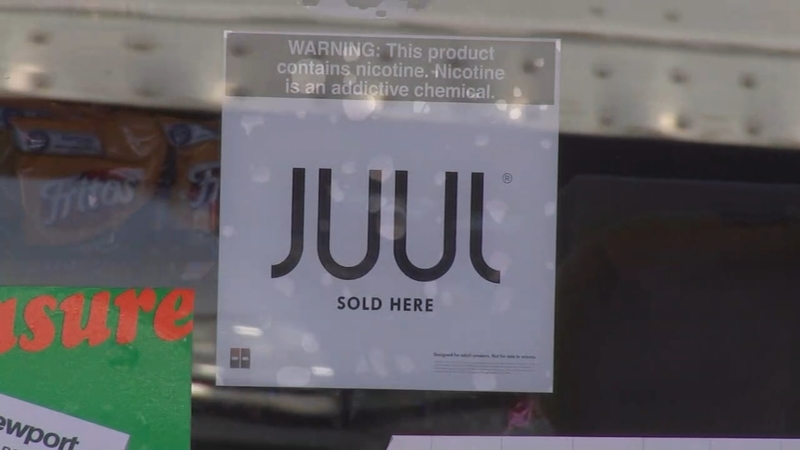 DOYLESTOWN, Pennsylvania (WPVI) -- School nurse Carol Klein say she has to call 911 and send students to the emergency room more than ever before. The reason, she says?

"We have found kids unconscious, we have had kids with skyrocketing heart rates and blood pressures and we have had several kids have seizures," said Klein, who works at Central Bucks High School West in Doylestown.

She says vaping is the only logical explanation.

"These kids were vaping directly before this has happened and had no medical issues prior to this."

"They use glamorous models, sweet flavors and colorful advertising direct to your children's social media feed. That is not a coincidence. That is by design," said Weintraub.

Also named in the lawsuit are two local retailers, which Food and Drug Administration officials say sold e-cigarettes to minors.

Action News was unable to reach the owners of Delta Gas in Warminster.

The owners of U.S. Gas Mini Mart, listed in the lawsuit as Gulf Mart in Quakertown, say they were given a warning by the FDA in 2018 for selling to a minor.

They say the employee that failed to check the underage buyer for I.D. has been terminated.
Weintraub says if granted financial restitution from this lawsuit, the funds would go towards educational programs, addiction treatment and law enforcement in Bucks County.

He was joined by local school district officials who detailed how vaping is affecting their classrooms.

"The need to vape during the day impacts students' abilities to focus on academics. Efforts to identify and eliminate vaping by students during the school day uses precious staff and administrative time," said Dr. Samuel Lee, Superintendent of Bensalem School District.

Earlier this month, the FDA said manufacturers have 30 days to stop making and selling fruit and mint flavored vapes.

In response a spokesperson for Juul Labs gave this statement:

"We remain focused on resetting the vapor category in the U.S. and earning the trust of society by working cooperatively with local officials, regulators, public health officials, and other stakeholders to combat underage use and convert adult smokers from combustible cigarettes. As part of that process, we stopped the sale of flavored pods other than Tobacco and Menthol in November, suspended our television, print and digital product advertising, refrained from lobbying the Administration on its draft flavor guidance and support the final policy. Our customer base is the world's 1 billion adult smokers and we do not intend to attract underage users."