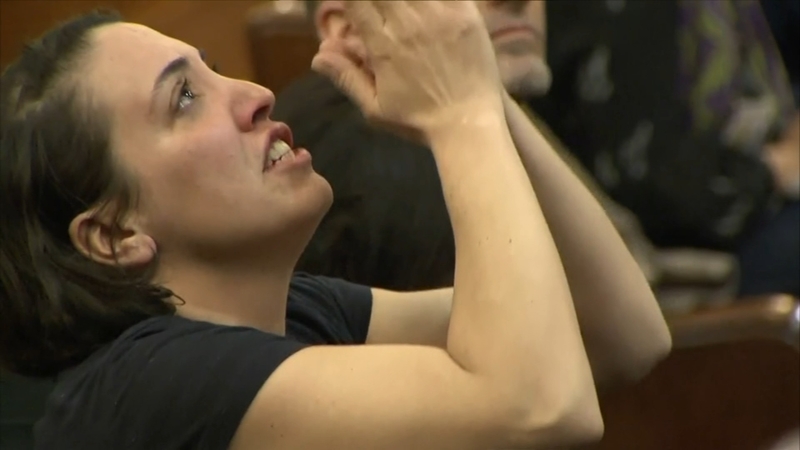 NEW YORK CITY -- A man was convicted Monday of killing a woman out running near her New York City home in a case that stirred urban fears, helped change the state's DNA-investigation rules and raised questions about race and police procedures.

News station video showed Karina Vetrano's loved ones erupting in cheers as a Queens jury delivered in Chanel Lewis' retrial, convicting him of murder and sexual abuse in Vetrano's 2016 death. A previous trial ended in a hung jury in November; the second jury deliberated for only five hours, staying into the night to deliberate.

Candace McCowan has more on the guilty verdict.

Lewis is set to be sentenced April 17 and faces up to life in prison.

Lewis' attorneys, the Legal Aid Society, called the outcome "a complete miscarriage of justice." They had unsuccessfully sought a hearing Monday after getting an anonymous letter saying that police had pursued two white suspects before taking DNA samples from hundreds of black men - in what the defense called a "race-biased dragnet" - and coming to focus on Lewis.

"Our client did not receive a fair trial," the Legal Aid Society said, adding that it would appeal.

The New York Police Department said in a statement that the anonymous letter was "riddled with falsehoods and inaccuracies," the investigation was painstaking and "the evidence clearly shows that Chanel Lewis is responsible for her death."

Phil Vetrano found his 30-year-old daughter's body, sexually abused and strangled, in August 2016 in a park where they often went for runs together.

The attack redoubled the wariness of women who run alone, and it baffled investigators for a time. Lewis, 22, was arrested six months later.

Authorities said his DNA was found on Vetrano's neck and cellphone and in a mixture of DNA under her fingernails. His own phone contained downloaded photos of the crime scene and searches for information about the case, police said.

And Lewis taped a confession, saying he was upset at someone else - a neighbor of his who played loud music - and "lost it" when he saw Vetrano.

"One thing led to another," he said in the confession. "Hitting her and stuff like that."

Lewis said he strangled Vetrano but didn't sexually abuse her.

Lewis' defense said that the DNA evidence hadn't been gathered properly and that the confession was coerced and didn't match Vetrano's injuries or some other facts.

Before Lewis' arrest, the investigation prompted police prosecutors to seek state permission to use a technique known as familial DNA searching - looking for people similar enough to be closely related to whoever left DNA at the crime scene, in hopes they will lead to a suspect.

The state Commission on Forensic Science ultimately agreed in June 2017 to allow familial DNA searching in murder, rape and some other cases. The decision came over the objections of civil libertarians who said the practice entangles law-abiding people in investigations because of their family ties.