One of Katie's 'Bachelorette' breakups brings the other men to tears 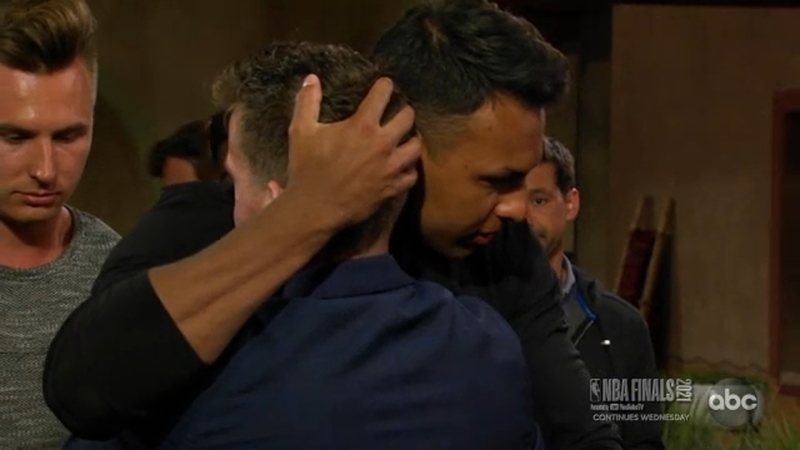 NEW YORK -- Katie kicked off this week of "The Bachelorette" by saying she wanted to see which of the men were "master of their domain." She had Tayshia and Kaitlyn deliver her message to the men. Katie said she wanted to make it hard for them, but isn't this process difficult enough?! Operation WOWO. Bleep, bleep, no more low fiving in the shower.

One-on-One with Justin
Kaitlyn dropped off a date card that read, "Justin, I can picture a future with you." That meant that he was meeting up with Katie to do a wedding photoshoot. As Justin got ready for his date, Hunter told Greg that he thinks he, Greg, and Connor, along with one other man are in the top four. It rubbed Greg the wrong way that Hunter was thinking in such a calculated manner. Meantime, Franco helped style Katie and Justin for their wedding photo shot, complete with a pretend wedding day. They wrote their own vows to each other and they were really beautiful! Then they smashed a wedding cake in each other's faces.

During the evening portion of the date, Katie told Justin that it was hard thinking of her wedding day without her father since he passed away. Before her dad passed away, she found out that her dad wasn't her biological father. She said that her biological dad wants to be in her life and she's struggling to build a relationship with a man she knows nothing about, while also mourning the man who raised her. She said that when she gets close to her biological dad it's a reminder that her dad isn't alive anymore. Justin told Katie that he's honored she chose him for this date. Katie offered him the date rose and then took him to dance to a song by the artist Max.

On tonight’s menu: a roast with a side of tea 👀 #TheBachelorette pic.twitter.com/wDRn1jIOdM

The group date card read, "Blake, Andrew S., Michael A., Greg, Aaron, Mike P., Brendan, James, Tre, Hunter, This queen is looking for her king." That meant Connor was going to get a one-on-one! Katie said while Justin's one-on-one date was a wedding, this date was like a "Bachelorette" party. Two drag queens came out and put on a little show for the guys. Then the men had to put on a royal debate in front of Monet X Change and Shea Coulee. The queens were not impressed with how lame the debate was and they found it too sweet. So, they started asking tough questions like who is least compatible with Katie. They threw Hunter under the bus for having a top-four list. Then, he revealed that he's falling in love with Katie! Tre and a few of the other men threw him under the bus and said that he is not in love with her. Hunter refused to fire back and then he gave a mushy speech about not taking her for granted.

Later, Katie took time to speak to each of the men one-on-one. Andrew S. told Katie that he's "good" and "master of his domain." He told her no one else has what they have and he wants to be her king. Greg told Katie that he felt bad talking about their connection in front of the other men. He told her that he's falling for her and Katie said that she feels the same. Blake told her that he's struggling with the WOWO challenge, apparently, he does it a lot. Cue the sexual innuendo. That didn't stop them from kissing! They have a fun rapport with each other.

Just as Katie was having fun, James made a last-ditch effort to stay in her good graces by joining the Right Reasons police force. He told her that Hunter is there for the wrong reasons and that put a damper on things. Tre said that Hunter gave a different answer to the queens about whether or not he loved Katie. Aaron also piled on. Katie decided she needed to hear Hunter out.

Hunter said that he's only focused on her and he doesn't know how else to defend himself. He added that she should notice that the guys keep picking people to gang up on. Katie said that she doesn't feel good about things and she needs to take a minute. She got so upset she started to throw up! Then she went back to the group and told them that she would not be handing out a rose that evening, said goodbye to them, and walked out. Brendan never got time with her as a result of the drama.

The date card read, "Connor, let's let our love shine bright." Katie was in better spirits seeing him after her disastrous group date. However, Katie said that she doesn't feel a spark when they kiss and she's hoping to move him out of the friend zone. They went on a double date with Kaitlyn and Jason! They played volleyball, a game with a coconut, and a getting to know you type game. Jason said that he's a big Connor fan because he seems to be a great guy. Jason and Connor grilled together and talked about how things were going as the girls made margaritas. Kaitlyn and Jason gave them a pep talk about how to turn a friendship into a romance. Then they did some kissing!

Later, Katie was wearing sweats as she headed to Connor's hotel room. Clearly, Katie didn't think the kissing went well. UGH. Poor Connor, forever in the friend zone. He opened the door and she was already crying. She told him that he's a great man, the song he wrote her meant the world to her, and she said, "I can't even look at you right now." "It's ok, I know where this is going," he told her. He consoled her as she broke his heart. She told him that she just couldn't get it there with the kissing and that something was missing. Then Connor started to cry! It was such a sad breakup! Connor is a class act. Katie gave it an A+ effort to try to get their relationship to a romantic level but sometimes it's just not there. "God! How bad of a kisser am I?!" Connor lamented. He went back to the main room where all the guys were and he cried on their shoulders. It brought tears to Tre's eyes! They all started to cry because it got really emotional to say goodbye to such a good guy that they had all become friends with.

Blake Consoles Katie
Blake gave Katie a "Say Anything" moment with their song "Memorize You" from their date! He thought she could use some cheering up so he went to see her. He gave her some crazy romantic kisses! He turned her frown upside down! He told her that he could tell she had been crying and he just wanted to be with her. He told Katie about Connor's sad goodbye to the guys and he said he couldn't stop thinking about how Katie was probably sitting around crying too. Katie said it was the greatest surprise ever! "It's impossible to deny that Katie and I are going to fall in love," Blake said. "I feel like Katie is going to be my fiancée!"

Katie told the men that it was a tough week for her sending Connor home and she said that the group date was also hard on her. She said time would not make a difference so she would be skipping the cocktail party and just handing out the roses. Once it was time to hand out the roses, Katie called Hunter's name, grabbed a rose and asked him to talk outside. She told him that the drama he brought basically ruined the group date, and he apologized. He went back in and stood with the group of men, not wearing a rose. Katie told the men she didn't have time to play catchup or deal with the drama.
1) Justin (one-on-one date)
2) Blake
3) Andrew

Next Week
Katie will pick her final four next week and that means hometowns. There are a lot of emotional times ahead, and one concerning clip where Blake apparently told Katie that he's not in love with her? Could he be referring to something else? Time will tell! Next week feels so far away!