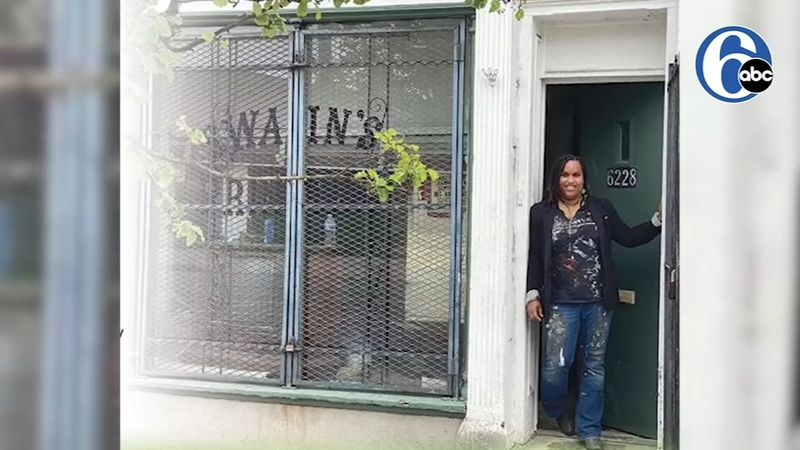 "My grandmother Maxine Whatley was a fashion designer and creative in every aspect. My father, Ron Wandering Feather, was an artist since he was 18," said Keisha Whatley, owner and lead artist for Custom Arts Studio. "He always worked for himself. One of the things he said to me when I was in high school was, 'You want to own 100% of your day.'"

Whatley carried that message throughout her journey as an entrepreneur with Custom Arts Studio, a full-service art design company that caters to organizations all over Philadelphia.

But that message extended further than herself as she aims to create opportunities for others.

"I had this idea for at least two to three years. Maybe even five years. I've been building out this plan to have a creative hub," she said.

While Whatley was away for the holidays in December of 2020, she received a call from a friend who is a realtor that an amazing property had become available along Germantown Avenue.

"When I got back to Philly, I came here and absolutely fell in love with the property," Whatley said.

This 120-year-old building shares a historic past Whaley says that helped fuel her vision for this community hub.

Whatley says William Swain was the first African-American in the Philadelphia Printer's Union to get a union bug medal.

His wife, Ena Swain, was the first African-American accountant at a large brewery company in the city. She also was a historian.

"Being an artist myself, I find myself primarily being a visual storyteller for most of my work...and I just really fell in love with the story of the former owners of this space," she said.

Whatley adds before 1979, the building used to be a pharmacy, where a lot of the old items, dating back to the 19th century, were restored with plans to display in the new space called the Germantown ARTHAUS.

Part of the name ARTHAUS comes from the German word for house, which is a nod to the Bauhaus movement from the 1900s.

The goal is to transform the three-story building into a studio space for artists, lunch café, and community space for events to help entrepreneurs grow coming off of a tough year amid the COVID-19 pandemic.

"When we were in the process of purchasing the building, we knew that there would be a shortfall between the funding we were able to secure and the renovations that are needed," Whatley said. "There's a lot of work to do."

Whatley says she would love to open the Germantown ARTHAUS as early as November of 2021, but that all depends on capital raised and final licensing approvals.

She recently partnered with The Artists Bank, a nonprofit organization, to help in the process of crowdfunding through their launched GoFundMe campaign.

This campaign also includes artistic ways the community can join and have a sense of ownership in the building. Through name paving, handprints, and other initiatives, Whatley has planned.

"My goal when people walk in the door is that people feel like they own a piece of this," she said. "That this is for them, in service of them. To be a space where people can come and breathe. A space where people can come and connect, especially after the pandemic."
Report a correction or typo
Related topics:
businessgermantown (philadelphia)mount airy (philadelphia)artbusinessarts & cultureinstagram storiescommunity
Copyright © 2022 WPVI-TV. All Rights Reserved.
TOP STORIES
AccuWeather Alert: Hot & Humid Sunday
Police: Triple shooting leaves 2 teens critical in Penn's Landing
Philadelphians find ways to stay cool amid scorching May weekend
Officials: 3 juvenile swimmers pulled from rip currents in Ocean City
Some peanut butter recalled for potential salmonella
Officials investigate 2 fatal accidents in Gloucester Twp.
Dog battles mountain lion to save owner's life
Show More
Possible monkeypox case linked to patient in NYC
Police: West Philly shooting leaves man dead, teen injured
Colwyn Borough aims to overcome struggles with new chief
Experts issue warning to protect your cryptocurrency accounts
Police ID suspect wanted for shooting tow truck driver
More TOP STORIES News