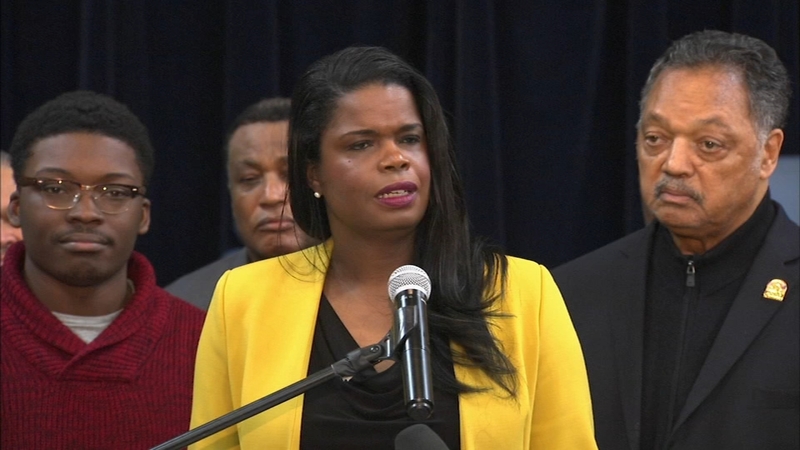 CHICAGO -- Although Cook County State's Attorney Kim Foxx publicly recused herself from the Jussie Smollett case, she still sent texts to lead prosecutors in charge, and an email from one of her supervisors raises further questions about her authority over the case.

The ABC7 I-Team obtained an email from Alan Spellberg, supervisor of the Criminal Appeals Division, sent to office brass. In it he writes, "My conclusion from all of these authorities is that while the State's Attorney has the complete discretion to recuse herself from any matter, she cannot simply direct someone (even the First Assistant) to act in her stead.

Foxx recused herself from the case because she had conversations with Smollett's family related to the case before police announced they believed the actor's report of a hate crime was made up and that the attack against him had been staged.

"A real recusal under Illinois state law means that the case would be in somebody else's hands - outside of that office, outside of her - and that's not what happened," said ABC7 Legal Analyst Gil Soffer.

Instead, text messages obtained by the I-Team show that after Foxx recused herself, she texted First Assistant State's Attorney Joe Magats, who was put in charge of the case. She wrote: "Sooo......I'm recused, but when people accuse us of overcharging cases...16 counts no a class 4 becomes exhibit A."

Magats responded, "Yes. I can see where that can be seen as excessive."

Check out this text message obtained by the @ABC7Chicago I-Team from State’s Attorney Kim Foxx to Joe Magats— the prosecutor running the Jussie Smollett case *after* her recusal. pic.twitter.com/NInWqEfDSC

After the charges against Smollett were dropped, Foxx explained the communication, saying, "We use the word recusal, but it was really 'don't tell me what's happening with the investigation.'"

But Foxx's texts to Magats continued, presumably referring to the R. Kelly case, "Pedophile with 4 victims and 10 counts. Washed up celeb who lied to cops, 16. On a case eligible for deferred prosecution I think it's indicative of something we should be looking at generally. Just because we can charge something doesn't mean we should."

In an exclusive interview, Mayor-elect Lori Lightfoot spoke exclusively to ABC7 about the lawsuit filed by the city of Chicago against Jussie Smollett.

"I don't think she should resign, but I do think we need a report that answers all the questions that have been piling over the last three weeks, that nobody has any answers to," said Mayor Rahm Emanuel.

Chicago Mayor Rahm Emanuel said the city is calculating how much it cost to investigate Jussie Smollett's case and will be sending the actor the bill.

Foxx's supporters continue to use the word recused.

"She recused herself and turned this case over to her staff members, and I think that was the appropriate decision to make," said Cook County Board President Toni Preckwinkle.

"It's clear she was talking to other people in her office about the case. I think there needs to be a question of how honest she's been to the people of Cook County," said Fraternal Order of Police President Kevin Graham.

The Cook County Inspector General is looking into how Foxx handled the case. Both Emanuel and Preckwinkle said that will answer a lot of questions. But Graham wants federal investigators to look at the case instead.

Smollett was indicted on 16 counts of disorderly conduct for filing a false police report by a grand jury. Investigators said he paid two brothers to help stage a hate crime attack on himself in Streeterville in late January.

Foxx released a statement Tuesday night, saying, "After the indictment became public, I reached out to Joe to discuss reviewing office policies to assure consistencies in our charging and our use of appropriate charging authority. I was elected to bring criminal justice reform and that includes intentionality, consistency, and discretion. I will continue to uphold these guiding principles."

Smollett has continued to maintain his innocence, saying he has been truthful the entire time.