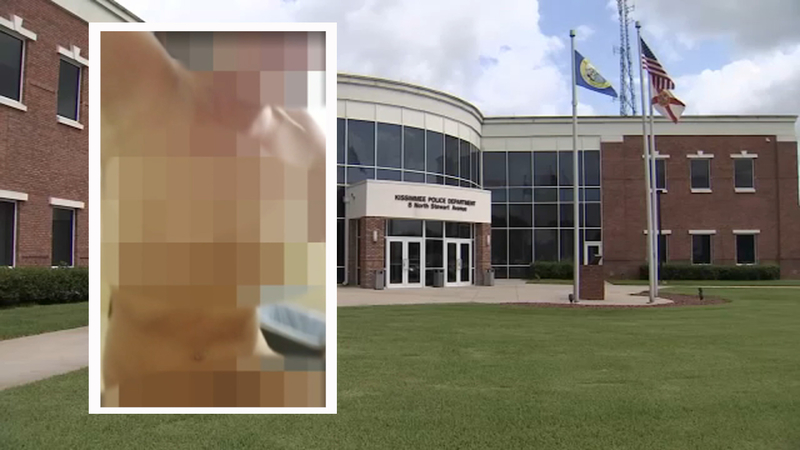 KISSIMMEE, Florida -- A school resource officer in Florida left little to the imagination in an inappropriate video she allegedly took in the staff bathroom at the school she worked at.

Kissimmee Police Department said she was working at Imagine Kissimmee Charter Academy in December when she sent the video to her husband.

The video shows the deputy naked in the staff bathroom with her uniform, gun and pepper spray on the ground.

She asked the recipient what they thought of what she was doing.

The video came to light after the sheriff's office were investigating a personal incident with the SRO and her spouse.

From there, Kissimmee police began their own inquiry.

In the report, investigators said the SRO was on lunch break when the video was taken.

The report reads, "Even though she was on a lunch break, she was subject to recall at any time, and due to her disrobed state, it would delay any immediate response."

According to the report, the investigators said the officer told them she knew what she was doing was wrong, but didn't think she needed to be fired.

The police chief said it was completely unacceptable and she had lost his trust to protect the 775 students and 65 staff members at the school.

"It goes to show what that person, what kind of behavior or their lack of commitment to professionalism, providing security in schools. If you're going to do this, I don't know if you can be trusted at any time on duty," he said to WFTV.
Report a correction or typo
Related topics:
floridaschoolu.s. & worldnude photos
Copyright © 2022 KTRK-TV. All Rights Reserved.
TOP STORIES
Off-duty corrections officer robbed, carjacked in Philadelphia
2 shot dead after trying to break into South Philly home: Police
2 states battle abortion trigger laws; pharmacies limit Plan B sales
48 migrants die after 18-wheeler abandoned in Texas heat
AccuWeather: Bright, less humid the next few days
3 dead, at least 50 injured after Amtrak train derails in Missouri
Jan. 6 panel to hold surprise hearing, present new evidence
Show More
Long-term plan for Navy Yard to be unveiled today
AAA projects record-breaking holiday travel, gas prices
11-year-old girl in South Jersey dreams of playing in the MLB
Man who allegedly shot driver following crash found guilty by judge
How overturn of Roe v. Wade could transform political landscape in Pa.
More TOP STORIES News