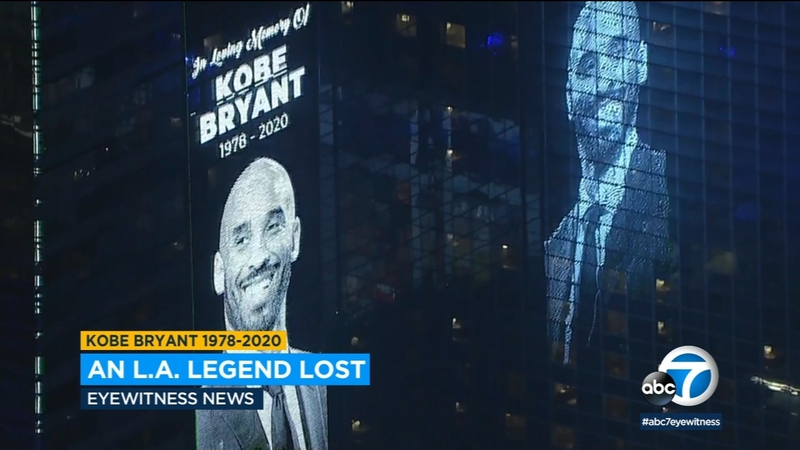 CALABASAS, Calif. -- Basketball legend Kobe Bryant and his daughter have died after a helicopter crash near Los Angeles killed all nine people on board, multiple sources told ABC News and ESPN.

Officials said a Sikorsky S-76 crashed on a hillside in the town of Calabasas around 9:45 a.m. Sunday.

Sources told ESPN the retired NBA star and his 13-year-old daughter Gianna were among the victims in the Sunday morning crash. They were on their way to a travel basketball game, a source with the Los Angeles Lakers told KABC-TV.

Another person killed in the crash was identified by friends and family as Christina Mauser, an assistant basketball coach at Harbor Day School in Orange County.

Her husband Matthew Mauser, the head basketball coach at the school, posted on Facebook: "My kids and I are devastated. We lost our beautiful wife and mom today in a helicopter crash. Please respect our privacy. Thank you for all the well wishes they mean so much."

The circumstances surrounding the crash are unknown, and an investigation is ongoing.

The LAPD was not flying choppers on Sunday morning, the morning of the Kobe Bryant crash. ABC News confirmed that the weather did not meet LAPD's standards for flying.

The 41-year-old Bryant spent his entire professional basketball career with the Lakers and won five championships. Bryant was drafted to the NBA directly out of Lower Merion High School in Ardmore, Penn., a suburb of Philadelphia. He was the 13th choice in the first round of the 1996 NBA Draft.

Bryant, known as the Black Mamba, averaged 25 points per game in his career and was the fourth-highest scorer in NBA history, with 33,643 points, recently removed from third by LeBron James.

Bryant retired in 2016, finishing two decades with the Lakers as a prolific scorer with a sublime all-around game and a relentless competitive ethic.

He had one of the greatest careers in recent NBA history and became one of the game's most popular players as the face of the 16-time NBA champion Lakers franchise. He was the league MVP in 2008 and a two-time NBA scoring champion, he earned 12 selections to the NBA's All-Defensive teams and earned two Olympic gold medals. In December 2017, the Lakers retired the two jerseys that Bryant wore during his time with the team: numbers 8 and 24. 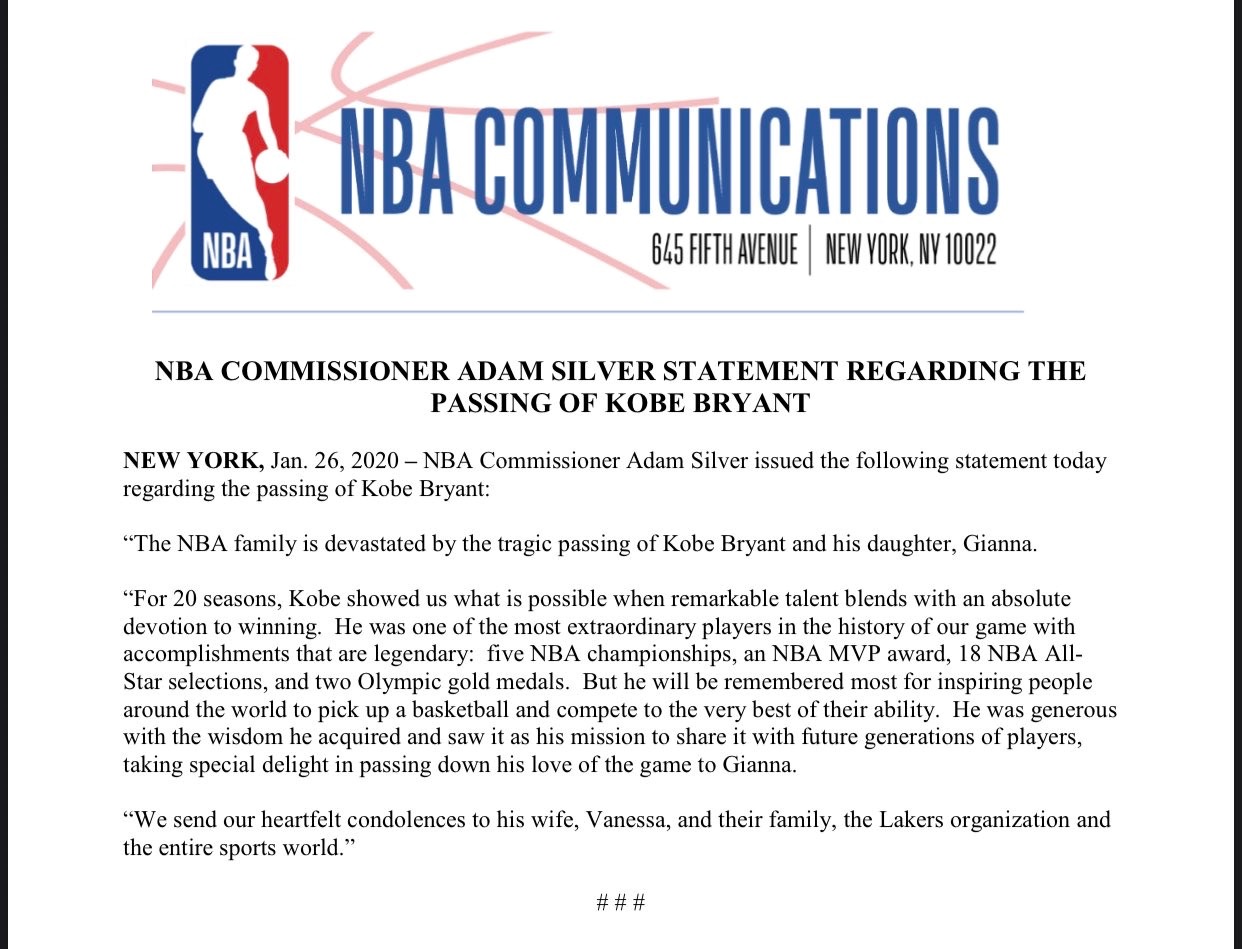 Messages of condolence and tributes to one of basketball's all-time greats have been pouring in.

"Words can't describe the pain I'm feeling," Michael Jordan said in a statement. "I loved Kobe - he was like a little brother to me. We used to talk often, and I will miss those conversations very much. He was a fierce competitor, one of the greats of the game and a creative force. Kobe was also an amazing dad who loved his family deeply - and took great pride in his daughter's love for the game of basketball."

NBA Commissioner Adam Silver said in part: "But he will be remembered most for inspiring people around the world to pick up a basketball and compete to the very best of their ability. He was generous with the wisdom he acquired and saw it as his mission to share it with future generations of players, taking special delight in passing down his love of the game to Gianna."

Shaquille O'Neal tweeted: "There's no words to express the pain Im going through with this tragedy of loosing my neice Gigi & my brother @kobebryant. I love u and u will be missed. My condolences goes out to the Bryant family and the families of the other passengers on board. IM SICK RIGHT NOW."

Kobe was so much more than an athlete, he was a family man. That was what we had most in common. I would hug his children like they were my own and he would embrace my kids like they were his. His baby girl Gigi was born on the same day as my youngest daughter Me’Arah. pic.twitter.com/BHBPN5Wq8V

Bryant has four children, all girls.

Off the court, Bryant won an Oscar award in 2018 for "Dear Basketball" an animated short film based off a letter that he wrote that was published in The Players' Tribune.

Colin Storm was in his living room in Calabasas when he heard what sounded to him like a low-flying airplane or helicopter.

The fog then cleared a bit, and Storm could see smoke rising from the hillside in front of his home.

Juan Bonilla of Calabasas said he was working on his roof Sunday morning when he heard a helicopter flying low nearby. He said he thought it was a sheriff's helicopter on a training mission. He heard nothing amiss with the engine or rotors and said he did not see any mechanical issue with the chopper. It was foggy Sunday morning, but he said visibility didn't seem to be low at the time of the crash.

Firefighters hiked in with medical equipment and hoses, and medical personnel rappelled to the site from a helicopter, but found no survivors, Los Angeles County Fire Chief Daryl Osby said.

Firefighters worked to douse flames that spread through about a quarter acre (.10 hectares) of dry brush, Osby said.

The National Transportation Safety Board sent a "go team" of investigators to the site. The NTSB typically issues a preliminary report within about 10 days that will give a rough summary of what investigators have learned. A ruling on the cause can take a year or more.

"They will look at man, machine and environment," said Gary C. Robb, an aviation attorney in Kansas City who wrote a textbook on helicopter-crash litigation.