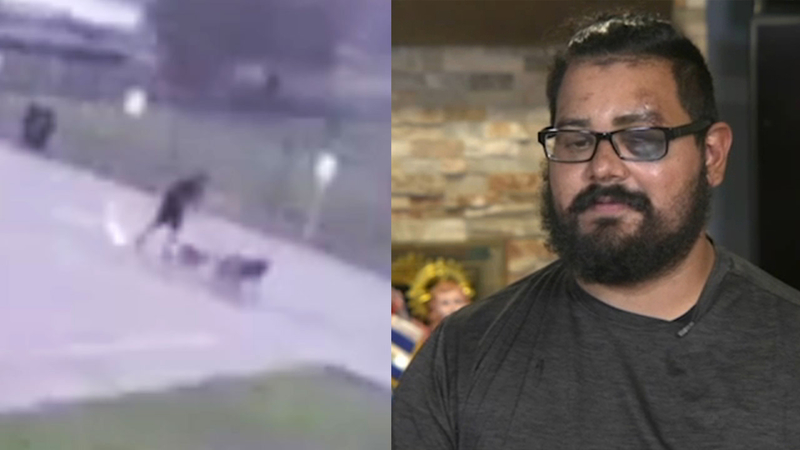 Man struck by lightning speaks out

HOUSTON, Texas -- According to the National Weather Service, the odds of being struck by lightning are one in 15,300.

Alex Coreas was that one, and Sunday he told his incredible story in an exclusive interview.

The 27-year-old mechanic was walking his dogs near Houston Thursday when a pop-up thunderstorm moved into the area.

"I saw it in the distance, and I started walking faster," Coreas said.

The odds that the strike would be recorded on video were even greater, but Coreas beat those odds as well.

"I have no memory of being hit," Coreas said. The video filled in the blanks.

Video obtained by Eyewitness News shows the moment a man instantly collapses when he was hit by lightning in the Spring area.

"My family asked if I wanted to see it, and it was really strange looking at that happening to me," Coreas said.

The video shows a small bolt appear out of nowhere and hit the concrete just behind Coreas. He immediately fell forward, unconscious on the sidewalk.

"The first thing I remember was kind of waking up in the helicopter, and they told me I'd been hit by lightning," Coreas said.

His left eye remains swollen shut, not from the electricity that traveled up his leg, but from the fall he took afterward.

Eventually his body began to feel the pain from the jolt. He remained in the hospital for four days.

"My first question was whether my dogs were okay," Coreas said.

They escaped without injury and were reunited with their thankful owner on Sunday.

"They're my kids -- Sophie, Honey and Hazel," Coreas said.

Coreas said what impressed him were the strangers who helped save his life, as he could see on the video.

"There was a woman who called 911 and, along with another guy, did CPR," Coreas said. "It's crazy. They ran to me and did something, not just standing there."

He said doctors told him the electricity traveled up his leg into his hip area. He'll require some follow-up medical treatment.

"They say after lightning, your body is never the same," Coreas said.

Over the weekend, he was resting at home, reflecting on the past few days and how they might have been his last.

"I'm lucky to be alive, and I just want to go on living my life," Coreas said. "And I have a story to tell."