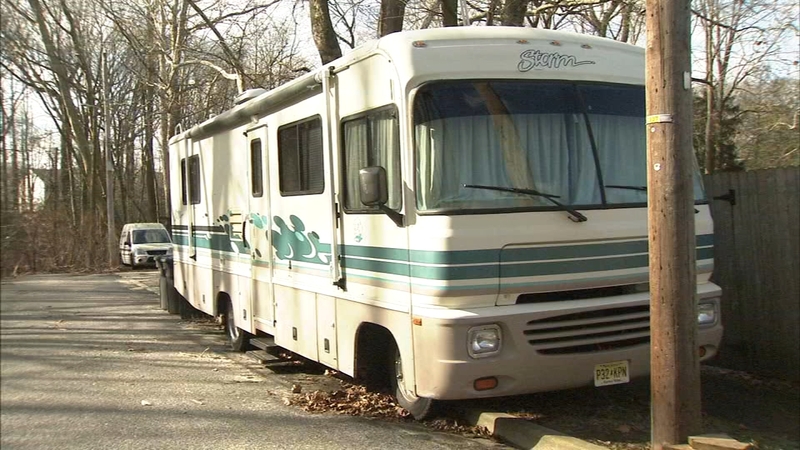 LINDENWOLD, N.J. (WPVI) -- Residents in one South Jersey neighborhood are fed up with a giant 30 foot RV parked on their road. They say they're getting little help from township officials, because its owner is the mayor.

Lindenwold mayor Richard Roach tells us that the vehicle is legally parked on the sidewalk, but our Action New Investigation found the law says otherwise.

(UPDATE: Neighbors told Action News on Friday that Roach has since moved the RV)

Residents on Chestnut Avenue, including Jane King and Danielle Boychuck, are tired of looking at the RV parked over the curb and in the middle of the sidewalk.

"He has been a great mayor, but he has an RV that's been parked on the street that is a complete eyesore," King said.

"I have a daughter and she can't get by it on the sidewalk," Boychuck said.

Boychuk says she complained to Mayor Roach when he first parked the 30-footer on the street in front of her house in October.

"He said that I could contact the township and they weren't going to do anything about it because of who he is," Boychuk said. "I was actually, like, shocked - my jaw dropped."

It's against the law to park an RV on the street in Lindenwold.

Boychuck says after getting nowhere with the mayor, she contacted police and code enforcement. She says Roach then moved the RV off the street and onto the sidewalk, though two tires remain on the roadway.

"It's upsetting, it's really upsetting. Yeah, because I feel like they are supposed to protect us and be there," Boychuk said.

We tried to get comment from the mayor. He told us the RV was legally parked and shut the door.

We told the responding officer that there's a feeling with some residents that they are being bullied and that the mayor can do what he wants.

The officer told us: "I'll check the code and let you know."

Lindenwold Police called us a short time later and said the RV was legally parked on the sidewalk. Police said there is no Lindenwold ordinance that made it illegal. But we found otherwise.

"The statute is pretty clear," says attorney Kenneth Vercammen. "39:4-138 sets forth where you are not permitted to park and one of those is a sidewalk."

Vercammen says state law says you can't park on a sidewalk unless there is a local ordinance explicitly saying it's legal to do so. Not only that, he calls the mayor's action not very neighborly.

"The simple thing that the mayor needs to do is move the vehicle and make arrangements to have it parked where those type of vehicles are permitted," Vercammen said.

"I used to have a camper and I wasn't allowed to park it. I had to take it to Chatsworth to park it," said King.

"I have a feeling it's just going to sit there and never going to go anywhere," Boychuck said.

So what does Boychuck and other residents do? The attorney says they may be able to get the RV moved if they file a complaint with the municipal court.

For now, it appears Mayor Roach, police and the borough officials are not going to do anything about it.