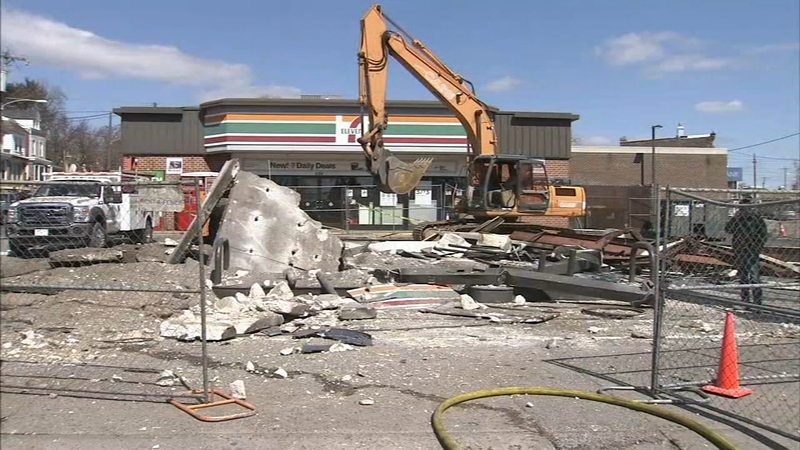 FELTONVILLE (WPVI) -- The investigation continues into an explosion at a 7-Eleven gas station in the Feltonville section of Philadelphia.

The explosion happened just after 11 a.m. Tuesday in the 4700 block of Mascher Avenue.

Neighbors blocks away heard and felt the blast.

"All of a sudden we heard like a big boom! Like, I thought it was a meteor. I thought like a plane crashed or something - all the flames," said Joan Hernandez of Feltonville.

William Brown said, "We live a couple blocks down and it went boom and my wife hollered - agh!"

Investigators say work was being done on the island out in front of the 7-Eleven store.

The gas tank had been removed on Monday but contractors were working on removing beams when something sparked the blast.

One official told Action News there may have been residual fumes even though the tank was removed.

Khaled Kayed also heard the boom. He grabbed his drone and got some footage in the aftermath.

He told us, "Got some nice footage of the flames still going on and right when the firefighters started getting here and putting the fire out."

Surveillance video from a nearby nail salon shows a manhole cover coming down on Meko Noel's car. She was inside the 7-Eleven when the explosion happened.

"The manhole probably flew up in the sky when the explosion happened and then landed on the back of my car and rolled off," she said. "The flames were maybe 20 feet in the air. It was really high and it was really scary and we didn't know what to expect."

No injuries were reported in the blast.