Eagles' Malcolm Jenkins: Replay officials should 'stay off the bottle' 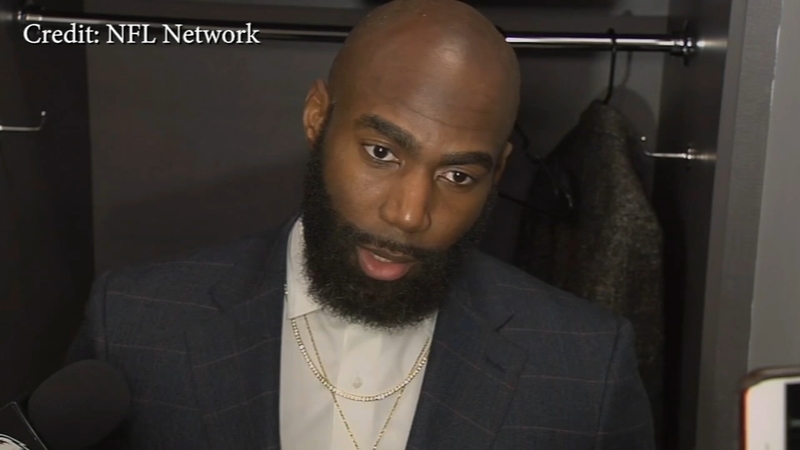 Eagles' Malcolm Jenkins: Replay officials should 'stay off the bottle'

Jenkins' hit on returner Jourdan Lewis resulted in a fumble that linebacker Kamu Grugier-Hill appeared to recover when he came out of the pile with the ball. The officials originally ruled that Lewis was down by contact. The Eagles challenged, and while the call was reversed to a fumble, Dallas maintained possession because recovery "wasn't clear" on instant replay.

"That was a pretty terrible call," Jenkins said. "They reviewed it and the explanation I got was that it wasn't a clear recovery, although Kamu had the ball in his hand and there was only Eagles defenders on the ball in replay. So whoever's watching that in New York should stay off the bottle."

Grugier-Hill echoed Jenkins' sentiment that there were only Eagles players in the scrum.

"They just said that the video didn't show me getting up actually with the ball, but it was clear I had the ball, so I don't understand," he said.

If the fumble recovery had been awarded, the Eagles would have been set up deep in Dallas territory to start the game. Instead, the Cowboys struck first in a game that needed overtime to decide it.

The loss dropped the Eagles to 6-7. They now have just a 5.1 percent chance to make the playoffs, according to ESPN FPI calculations. Dallas' chances of making the postseason, meanwhile, jumped to 98 percent.

"Common sense, you saw Kamu come out with the ball. Obviously they don't pay me to make calls like that," Jenkins said, "but that was, in hindsight, obviously a big play in the game."