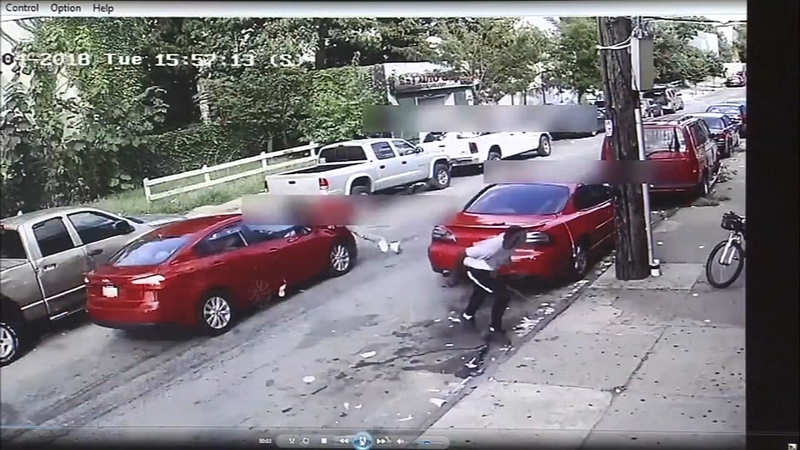 HUNTING PARK (WPVI) -- Police are looking for the gunman who chased a driver eight blocks through North Philadelphia and shot him.

Surveillance video from the incident in the 800 block of Diamond Street in Hunting Park was released on Wednesday.

It shows a red Kia being driven down the street when it hits a man who stumbled into the street while playing with friends.

The victim flipped into the air. The driver stops, only to be chased by the man he hit, and neighbors.

"This guy was in fear. He was in fear that some harm was going to be done to him, so he took off," said Capt. Nicholas Brown.

"Some of the males chased him a short distance on foot. A single lone male inside a red Pontiac chased the complainant approximately eight blocks," said Capt. Brown.

The Pontiac driver chased the fleeing driver into the parking lot of a supermarket. The pursuer can be seen jumping out and opening fire on the fleeing man, who was hit by a gunshot.

The victim, a Chalfont, Pa. man, was eventually treated and released from the hospital. Police say he will not face charges for what initially looked like a hit-and-run.

Police have the name of their person of interest in connection with the shooting, and expect to get an arrest soon.