The Phillies lost to the Nationals 3-2.

Luke Williams' family was there to see his walk-off home run.

First, no one, no matter his stature, is above suspicion. Just ask Cooperstown-bound ace Max Scherzer.

Second, if MLB expected a smooth integration of its newest guidelines into the flow of its games, that appears to be unlikely. Just ask anyone who saw Tuesday's game between the Philadelphia Phillies and Washington Nationals.

Scherzer was inspected three times for the use of foreign substances on the baseball during his five-inning outing against Philadelphia. The first two inspections, coming after the first and third innings, were ostensibly part of the new normal, as starting pitchers have been told that they can expect two inspections per outing.

It was the third inspection, which was instigated by Philadelphia manager Joe Girardi, that set off a firestorm.

"These are Manfred rules," Scherzer, referring to MLB commissioner Rob Manfred, said near the end of a lengthy postgame teleconference. "Go ask him. I've said enough."

The trouble arrived in the fourth inning and was presaged by a high-and-tight Scherzer fastball that sent Phillies third baseman Alec Bohm diving into the dirt. The errant offering from Scherzer, according to the three-time Cy Young winner, was not a message. It was simply a 95 mph fastball that he could not control.

"If you watch the Bohm at-bat, I almost put a 95 mph fastball in his head because the ball slipped out of my hand," Scherzer said. "The whole night, I was sick of licking my fingers and tasting rosin. I couldn't even get sweat from the back of my head, because it really wasn't a warm night. So the only part that was sweaty on me was actually my hair, so I had to take off my hat to get any kind of moisture on my hand, to try and mix with the rosin. For me, that's the confusing part, because I'm just trying to get a grip of the ball."

Two pitches later, Scherzer struck out Bohm with another fastball. He then took off his hat and ran his hand through his hair, which was saturated with sweat. He replaced his cap and adjusted it. Girardi became animated, pointed toward Scherzer, spurring the umpires, led by home plate arbiter Tim Timmons, to confer on the field. They then approached Scherzer, who had been watching them and laughing ironically, and requested a mid-inning inspection.

"I've seen Max a long time, since 2010," Girardi said. "Obviously, he's going to be a Hall of Famer. I've never seen him wipe his head like he was doing tonight, ever. It was suspicious for me. He did it four or five times. It was suspicious. I didn't mean to offend anyone. I just got to do what's right for my club."

Scherzer responded by tossing his cap and glove onto the ground, then started to unbuckle his belt, as if to say, "Look at whatever you want." The umpires poked around as Scherzer yelled and gestured to the Philadelphia dugout. Girardi yelled back. Washington manager Dave Martinez got involved, advocating for his pitcher.

"There was no sticky stuff, let's just say that," Martinez said.

Scherzer remained in the game, finished off the fourth, then the fifth, though his pitch count had climbed to 106 and his spot in the batting order was due up to lead off the sixth. Knowing he was likely finished for the night, Scherzer stalked off the mound with his gaze firmly fixed on the Philadelphia dugout.

"I wasn't challenging the club," Girardi said. "There was some coaches screaming at me, coaches I know, and it bothered me. I'm not playing games here. I have respect for people over there, I have respect for what Max has done in his career. But again, I've got to do what's right for my team."

Meanwhile, if anyone cared to notice, the Nationals won 3-2. Scherzer improved his record to 6-4 to go with a 2.19 ERA and won his 181st career game. The Nationals won their third straight to move into a virtual three-way tie for second place in the NL East with the Phillies and Braves.

But was anyone paying any attention to any of that? Well, Martinez was, for one, as he gamely tried to keep his postgame comments related to his team's collective moxie and saying that it was Girardi who "has to answer the tough questions."

Well, they were tough questions, all right. According to the memo MLB circulated about the enforcement processes related to its crackdown of the sticky stuff, there was this passage:

"An opposing manager may request that the umpire inspect the pitcher or a position player only if the manager (or a member of his team) observes behavior on the field consistent with the use of a foreign substance. If a field manager asks the umpires to check the opposing pitcher for foreign substances, the umpires will ask the requestor what is prompting the check and seek information on how they believe the pitcher is applying foreign substances to the baseball. All checks that are prompted by a request from a field manager will take place between at-bats. If a request is made during an at-bat, the umpires will wait until the current at-bat has ended to perform the check for foreign substances. Please note that a manager will be subject to discipline if he makes the request in bad faith (e.g., a request intended to disrupt the pitcher in a critical game situation, a routine request that is not based on observable evidence, etc.)."

So was Girardi's request in "bad faith"?

"I'd have to be an absolute fool to actually be using something tonight, when everybody's antenna is so far high," Scherzer said. "It is what it is. Whatever. Turn the page, move on."

Scherzer was making his first outing after coming off the injured list because of groin inflammation. He went five innings, allowing just two hits, including a monster home run to former teammate Bryce Harper, and three walks. He struck out eight batters despite what he termed as having "zero feel for the ball."

What was interesting about Girardi's challenge was that Scherzer's spin rates during the game -- spin rate being the advanced tracking metric that has gained so much attention in recent seasons -- was unusually low even though his always fierce velocity was even higher than usual.

But while the method was different, the results were not. They were on par with what everyone has come to expect of Scherzer over the past 14 big league seasons.

"If everybody's on the same playing field, you've got to find a way to get over it," Scherzer said. "Everybody is dealing with this. When you're on the mound, you can't make any excuses."

Scherzer wasn't the only pitcher in the league who wasn't happy with being checked by umpires Tuesday night. Athletics reliever Sergio Romo was visibly agitated when he was inspected at the end of the seventh inning of Oakland's game against the Texas Rangers, undoing his belt when he was approached by an umpire.

Los Angeles Dodgers star Clayton Kershaw, commenting on Girardi's request to have Scherzer checked, said he believes there should be some sort of punishment for managers if it turns out the pitcher is clean.

"You better find something if you're gonna call him out like that," Kershaw said. "Maybe there should be like a punishment if a manager checks a guy and there is something. But other than that, it is what it is. It's whatever."

"It's a good technique," he said. "You get going and in rhythm or something, and maybe you have a guy on base, have him check you -- it throws you off, it's something that you're not used to.

"Maybe they lose a challenge, or maybe if they have a challenge they can't do it -- I don't know. But I think there should be some repercussions for managers doing that on a whim like that. Because if you call somebody out ... and you don't find anything, I think that looks pretty bad on his part, the manager's part."

As the feedback from these new processes roll into baseball's central offices in New York, Scherzer believes something is going to have to give, even if the sticky stuff has to go.

"Hopefully, the players across the league understand that what we're doing right now, this is not the answer," Scherzer said. "I understand that there's a problem with Spider Tack and we've got to get that out of the game. But I also think there's a way to handle this that's a better way.

"Right now, we have monitoring in our clubhouses for [COVID-19] masks. I have articulated that one of my solutions is to have those monitors, instead of worrying about our masks, to be checking pitchers between innings."

Still, for all his concern over MLB legalities and all the drama generated by his outing on Tuesday, and the importance of the win for his club, the moment Scherzer seemed fixated by was when his 95 mph heater sent the 6-foot-5 Bohm sprawling in the batters box.

"That pitch specifically is the pitch that I fear the most," Scherzer said. "I don't want to throw that pitch. I never want to throw a ball near somebody's head."

The featured video in the player above is from a previous story. 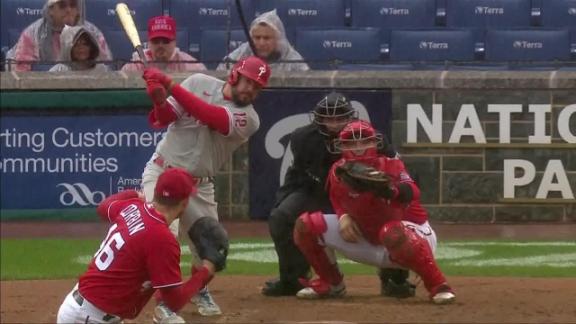