Drama, makeups, and breakups on 'The Bachelorette: The Men Tell All' 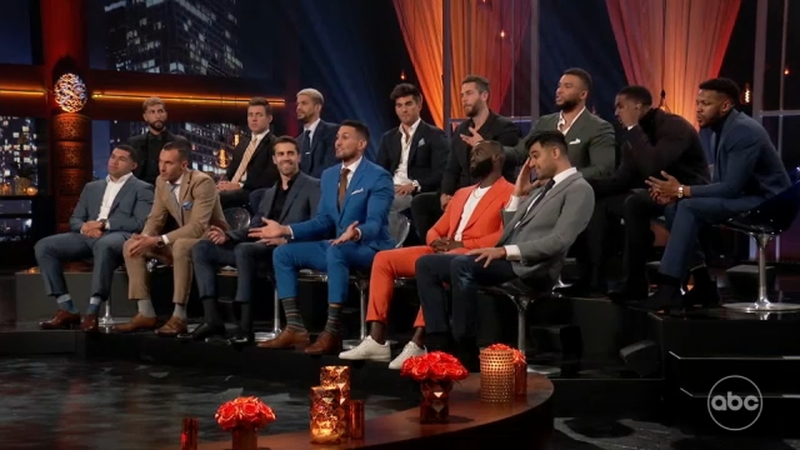 The men confront Jamie on 'The Bachelorette: The Men Tell All'

NEW YORK -- This week we take a break from our regularly scheduled "Bachelorette" dates for "The Men Tell All." After talking about how beautiful Michelle is, Kaitlyn and Tayshia wasted no time in asking the men about the drama in the house. Will and Peter argued about him calling Peter a narcissist on the show. Peter defended the fact that he's a "pizza boy" and he's provided for his family with his business. Will responded, "Tell your sister to stay out of my DMs." Classy. Kaitlyn and Tayshia then started to scream "excuse me" to get the men to stop yelling at each other and regain control of the show. Then the show put up the negative reviews on a screen and asked if Will had anything to do with it, which the guys thought seemed a bit suspicious. Peter then served Will with papers for defamation of character.

Ryan, from the first night's drama, said that he only brought the "documents" or "notes" on how to get farther on the show because his friends gave them to him. Ryan said he had nothing to do with making the documents. He apologized for taking the time from the guys who didn't get time the first night because of his drama. The other men just yelled at him and didn't accept the apology.

Martin's Lies
Martin said that he lied to Michelle because he felt like he was not respected by her. Will said the rumor on the streets was that Martin had a girlfriend while he was filming. Martin said he was dating someone before the show, but they broke up before he left. "I did not come on the show with a girlfriend," Martin said.

Chris S. Drama
Chris S. said that he wasn't just trying to get another rose when he told Michelle that some guys weren't there for the right reasons. Rick said that he took issue with Chris talking over Michelle. Chris claims that he had genuine intentions. Olu told Chris S. that he has a master's degree and that he should never say that he has a low IQ ever again. He walked over to Chris S. and Chris S. told Olu to sit down and then said he had nothing to say about that.

Jamie in the Hot Seat
Jamie came out to take the hot seat first. You'll remember he told Michelle that the men in the house were questioning her character. He talked about saying Michelle was in, "Spring break mode." The guys were upset about the things he said about Michelle and about them. Jamie talked in circles and never owned up or apologized for anything to the ire of the other men.

Rick in the Hot Seat
Rick was very sad watching his and Michelle's relationship back in the replay. He said he could see their future together and them having kids and their families getting along. Rick said he couldn't sleep thinking about seeing Michelle again. On a lighter note, he said he had a sore neck the day after the first night when he had his head on a platter all night long. The stage crew wheeled out a platter and tray and he took off the lid and there was a cake sculpture of Rick!

Tayshia revealed that she and Zac called off their engagement. "All I have to say is that I'm heartbroken but we tried really hard and I still love him very much and I'm not sure what the future holds," she said. She and Kaitlyn hugged it out. It was very short!

Rodney in the Hot Seat
As Rodney took the hot seat and Kaitlyn introduced him, Tayshia ran off stage to cry. It was so sad! Rodney said that he was all in for Michelle and no matter what, he'll always be Team Michelle. He said he loved introducing Michelle to his mom, but they did everything they could to pick him back up after his breakup and get him going again. He's such a positive guy! During a showing of some funny moments, a streaker said he loved Rodney, ran around the stage, and then security removed him. It seemed staged?

Clayton Sneak Peek
The guys talked about Clayton being the new "Bachelor." They think he's there for the right reasons and say that he really wants to have a family. Then, Tayshia and Kaitlyn showed a sneak peek of the new season. He says he's in love with three women and tells two women he's falling in love with them and tells one that he IS in love with them. During a rose ceremony, he tells two of the women that they should know that he was intimate with both of them. Yikes! Clayton cries and says he's broken, but then they show him looking at an engagement ring...so does he end up engaged? We'll have to wait and see starting Monday, January 3.

Becca Update
Former 'Bachelorette' Becca was in the audience and updated everyone that she and Thomas are still together. They planned to spend the holidays with their families together. She also announced that "The Bachelor: Live on Stage" was returning in the spring and traveling to 40 cities.

Michelle in the Hot Seat
Michelle said that it was great to see the guys and she was glad to have them on her journey. Michelle said to Rodney that she respected him because he was always kind even when things were tough. She told Rick that she appreciated that he was all in from the start. Jamie did not apologize to Michelle, but instead just said things he liked about her. She said that she thought he put people down when they weren't around and wasn't sure how he could preach positivity. "If anyone feels hurt by the words that have come out of my mouth, I'm sorry," he said. OK, that's not a real apology, and Michelle wasn't having it. After a lengthy back and forth, he finally said he was sorry for what he said. Everyone applauded. Finally!

Michelle is holding everyone accountable tonight. 👏 Get ready for the #MenTellAll TONIGHT at 9/8c. #TheBachelorette pic.twitter.com/v2kwwxZh9V

Martin then took the opportunity to apologize to Michelle. He added that he has since found his soulmate and he treats her like a queen. Michelle admitted that she thought she sent Olu home too early. She said she wished she had more time to explore their relationship. Peter then provided pizza for everyone and they loved it! So, it seems like the pizza is good! Even Will said, "This one is better than the one I tried." Then Will and Peter hugged it out! Wow! I guess the lawsuit might not happen afterall.

Finale Preview
Michelle has her Fantasy Suite dates next week with Nayte, Brandon, and Joe. "I've never had a feeling like when I kiss Nayte...Joe is my slice of home...I can see spending my life with Brandon," are all things she said about her final three. Michelle is worried she has stronger feelings for one man than he does for her. She really wants to get engaged, but will it happen?

3 incredible men, only 1 rose at the end of the journey. 💍🌹 #TheBachelorette pic.twitter.com/wjZHchH5I4

30 charming men will join Michelle Young on her romantic journey when season 18 starts Oct. 19, 2021 on ABC.