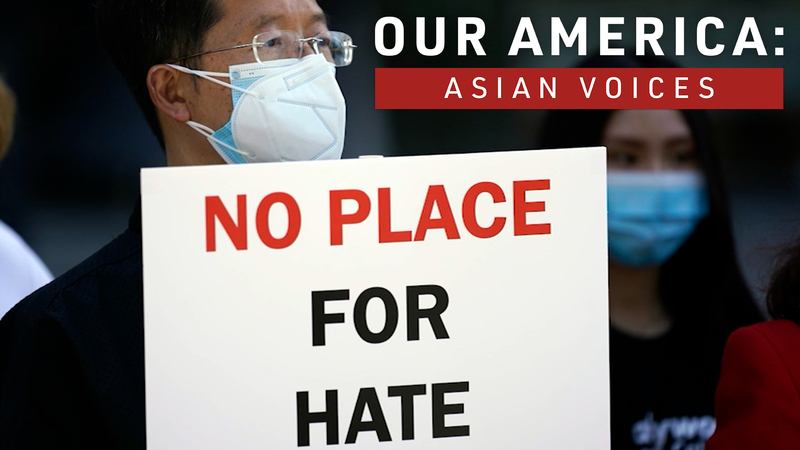 Asian Americans in news on how microagressions affect identity

Yet the AAPI community is also victim to invisible slights inflicted by microaggressions that happen every day.

Julian Glover, the race and social justice reporter with ABC7 News (KGO-TV in the Bay Area), spoke with colleagues in the newsroom to hear their stories about navigating uncomfortable conversations from childhood to the present day.

"I will tell you a story that I have never forgotten," Anchor Reggie Aqui said after a contemplative pause.

He recalled his middle school days in Baltimore, Maryland.

"Others have had much worse racism in their lives," he said. "I just remember this one time. It was in middle school. Out of nowhere in the hallway, this girl that I kind of knew turned around and said, 'My parents say that you bombed us at Pearl Harbor.'"

Regular viewers of ABC7 Mornings and ABC7 Midday, where Aqui can be found weekdays, try to guess his race and ethnicity and are often wrong.

Aqui joked that he often gets mistaken for Latino given his last name ("aqui" in Spanish translates to "here").

Aqui said he identifies as Hawaiian, Filipino and Caucasian. He was born in Hawaii and lived there for several years prior to moving to the Baltimore area in the fourth grade.

"My dad was a little boy living on the island when it got bombed. I made that very clear to her that it was my family that was attacked," he said.

"I don't think I've even told my parents about all of these experiences," said Kimberlee Sakamoto , an executive producer of digital content at ABC7 News, as she reflected on the interview.

She identifies as an Asian American woman.

Sakamoto said she is Korean American by birth and was adopted by two loving parents at a young age: Her father is Japanese American and her mother is Italian American.

She said picture day in second grade is one of her earliest memories of being othered.

"I was smiling the biggest smile, so excited to get my picture taken. And the photographer said, 'Honey, can you open your eyes.' And I went, 'My eyes are open,'" she said.

She said this memory is seared into her subconscious.

"All my life, in all my pictures, you can see the whites in my eyes because I open them very wide," Sakamoto said.

Even if the photographer forgot about his comments the next day, the interaction influenced how Sakamoto self-edited years later.

"The real consequences of microaggressions are exactly this notion that they're additive," said Evelyn Ho, a professor at the University of San Francisco. She teaches classes on Asian American communication and culture.

She said she's dealt with microaggressions over the years as an Asian American woman advancing in academia.

"'Oh, you speak English so clearly. Or wow, your English is so great,'" she said, recalling these encounters. "Although framed as a compliment, what hides beneath is this underlying assumption that you shouldn't be able to speak English well because you must be a foreigner, or you must be somebody who doesn't belong in this country."

She said this is a core component of the "forever foreigner" myth and stereotype Asian Americans carry in their shadow.

Like Ho, Sze said many assume she speaks in broken or accented English.

"That always made me sad," she said.

Sze, a Chinese American, was born in Taiwan and moved to California when she was eight years old.

In her opinion, the world has become much more welcoming in the decades since. She said a comment on someone's English proficiency would be out of place today, especially in the Bay Area where the AAPI population makes up the largest racial group in Santa Clara and Alameda counties.

But microaggressions continue to control how Asian Americans self-edit in professional settings.

"I think my [self-editing] begins with my name. I use my anglicized name. I also do have a Chinese name, which I don't use on air because I was told early on when I was starting my career ethnic names didn't do well on TV," Sze said.

She said if she were starting out in the TV industry in today's landscape, she would have made a different choice. Times have improved.

Sze also said she thinks about how microaggressions and stereotypes control how people perceive her, even after decades of experience navigating the television news industry

"As an Asian American woman, I think sometimes people do expect you to be a little more quiet," she said. "That's not how you survive as a journalist, so I'm very vocal. Sometimes that is perceived as, 'Oh, she's nasty,' or, 'She's a dragon lady.' That plays on some of the stereotypes that I'm not being the way I'm supposed to behave," she said.

Sakamoto said she found herself "constantly" being talked over in professional settings throughout her career.

She said this has led to her speaking up more and gently taking control of meetings.

"They're small encounters that just kind of blindside you, and they happen so quickly that you don't know how to react," said Jericho Saria, a Filipino American video editor and content creator for ABC7 News.

He said he often finds himself confronting expectations others have for him based on perceptions about his identity.

"They think that I'm docile, eager to please or not stir any trouble," Saria said.

Ho said stereotypes that Asians are docile, solely care about academic success and are "not from here" are all damaging to self-esteem and limit the possibilities Asian Americans see for themselves.

"When you have all of these established cultural beliefs in circulation and then you add a very powerful person with a big megaphone ... when [former President Donald] Trump says something like calling COVID 'China Flu,' those things trigger this whole other set of beliefs," Ho said.

She said learning about other cultures and practicing cultural humility is a step toward a solution.

"We have cultural differences. So what do you do with that? Cultural humility asks us to listen to the people around you and be open to learning," she said.

For Aqui, it's as basic as not judging a book by its cover.

"It would be cool if people understood that I am a mix of things. You don't have to be worried about asking me questions about it. But just having the question and being sensitive to the fact that I belong to multiple groups. That's a big step," he said.

Saria said he hopes people can be more mindful of how much microaggressions affect the person on the receiving end of what could be perceived as a back-handed compliment.