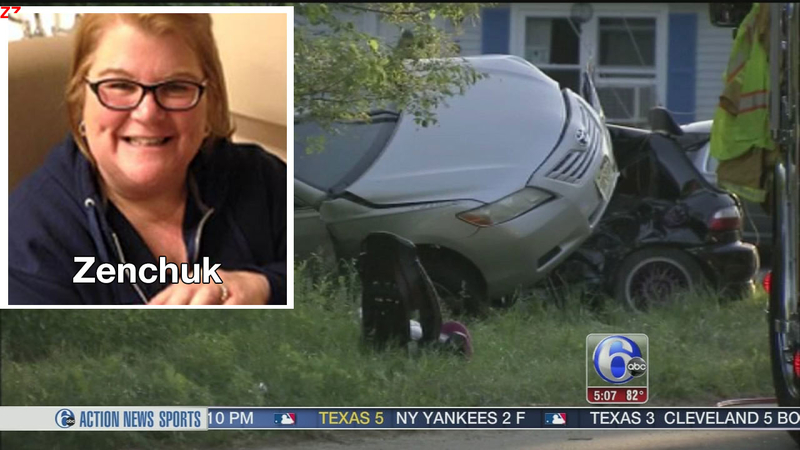 MILLVILLE, N.J. (WPVI) -- The two drivers and a child killed in a two-car crash in Millville, New Jersey have now been identified.

The crash happened at 4:15 p.m. Sunday at Buckshutem and University roads. That was where a black Honda Civic slammed into the side of a Toyota Camry.

The driver of the Camry was 49-year-old Michelle Zenchuk. She died at the scene.

Overnight, 8-year-old Melissa Headley, a family friend, died at Cooper University Hospital. She was one of two young passengers: a child believed to be 3 years old was listed in critical condition.

The driver of the Honda was identified as 22-year-old Christopher Platt.

Witnesses told Action News that two cars, including the Honda, were speeding down Buckshutem Road before the crash. Platt's vehicle swerved and passed another car before it went out of control.

"I looked at the road. I saw the car coming and it was just hydroplaning at the end, and it just went into her. The last thing I saw her do was just lean over and hold her hands out, that was it," said witness Willie Glenn.

Glenn, who lives on the corner and is friends with Zenchuk. He was also here 13 years ago when she was the victim of another accident that almost killed her son, Jake.

"We got hit by a drunk driver who was passed out and speeding," Jake Zenchuk said. "I almost lost my life too."

Jake Zenchuk was 13 at the time. His mother lives just two blocks away.

"All I can say is I miss my Mom. She was a great woman, she would have done anything for anyone," he said.

Police are considering speed, and possibly racing, as factors in this crash.

Christopher Platt was leaving his job at the racetrack down the street on Sunday, where he worked as a flagger.

"The younger driver was a good friend of mine for years. He was a really good guy too," said Jake Zenchuk.

"He would never hurt anybody intentionally, anybody ever. Ever. He was a great person," Kimberly Green, a friend of Platt's.

Jake Zenchuk's 3-year-old niece is recovering. She was the sole survivor in this tragic holiday crash.

"She just happened to be in the car, they were planning a fun day," he said.

The 8-year-old, we are told, was the step daughter of Zenchuck's, daughter Kayla. They were planning a Memorial Day weekend outing.

Residents along this stretch tell us speeding has always been an issue on this road from the racetrack. They are pleading from something to be done before another life is lost.