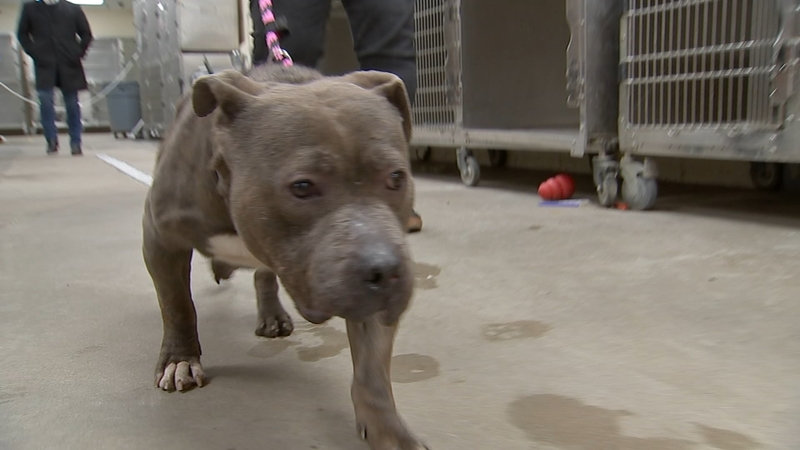 PHILADELPHIA (WPVI) -- Animal control officials in Philadelphia say a dog that vanished from their facility has been found and is now looking for a new home.

It all began about a month ago at the ACCT Philly, the Animal Care and Control Team of Philadelphia.

Max the pit bull mix was nowhere to be seen. He disappeared without a trace.

A $4,000 reward was posted and the search for Max began, including a campaign on social media.

The kennel has surveillance cameras but Max was housed in a blind spot of the non-profit.

Then, on Monday night, a tip came in.

"Someone saw him, recognized him from our social media posts, reached out right away," said Aurora Velazquez, the executive director of ACCT.

A Yardley business owner spotted Max with a woman. Soon, employees were at an undisclosed home in New Jersey on Tuesday morning.

"Our field supervisor hit the road first thing this morning, went out to the house where we thought Max was, she was able to find him," said Velazquez.

The woman could've adopted Max for as little as $65. Now, Philadelphia police are investigating.

"So we think her intentions were good. We do believe that she intended to adopt Max and give him a great home," said Velazquez.

ACCT Philly says people need to use the proper channels. The goal is to put homeless dogs with loving families.

"So nobody should ever be afraid of going through our adoption process," said Velazquez.

Max will be in good hands until he is adopted.

An ACCT Philly volunteer, Doug Hand, is taking the mild-mannered dog home to foster him.