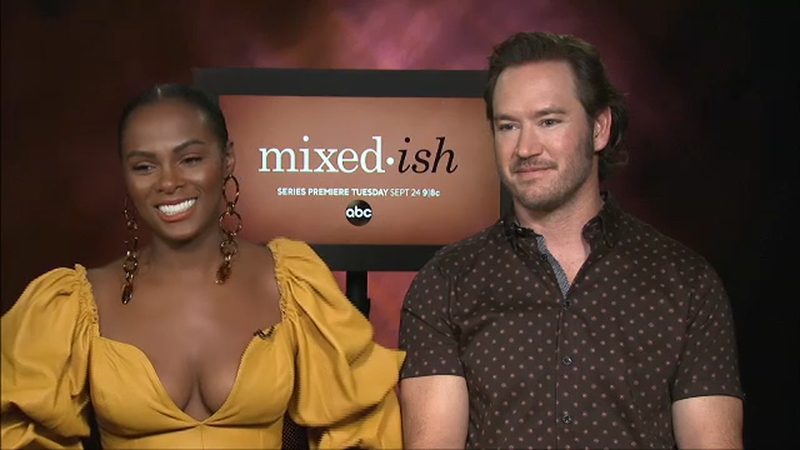 You first met most of these characters on the hit show "Black-ish." This new show dives into the childhood of Rainbow "Bow" Johnson.

Their chemistry as "Paul" and "Alicia" jumps off the screen and they have a great rapport in person as well.

"I knew it from literally after a scene, I was like 'Oh yeah,' and he walked out the door and I was like, 'That's it, that's it, he's it,' I mean, they already knew that," Sumpter said.

"I didn't know that, I was fighting for my life in that room!" Gosselaar said.

Sumpter admitted to being a fan of Gosselaar's from his "Saved by the Bell" days. And while that was set in the '90s, this show begins in 1985.

Both are thrilled to be a part of the "-ish" world.

The children on the show are all very talented young actors and actresses according to Gosselaar.

"That energy is always there, they are amazing. They really are special," Gosselaar said. "Arica Himmel who plays the young Rainbow Johnson channels Tracee Ellis Ross through her words and her look and everything."

Gosselaar and Sumpter both say they found inspiration in their "older" counterparts from "Black-ish" played by Anna Deavere Smith and Beau Bridges.

"I did watch him before I went into the chemistry read just to get his rhythms down and understand where my character would evolve to," Gosselaar said.

The show doesn't shy away from the tough topics of racism, politics and sexism, but uses the same touch of humor and family togetherness that fans of "Black-ish" and "Grown-ish" will recognize.

"They have this real finger on the pulse of how to take a topical conversation and make it funny and make it current and I think the through-line through the '80s is still relevant for today," Sumpter said.

"We're going to make you uncomfortable sometimes when you watch our show, especially when you watch Gary Cole's character and Christina Anthony's character who you plays Aunt Dee Dee, who plays her sister, and they will say things..." Gosselaar said. "That will blow people's hair back," Sumpter added.