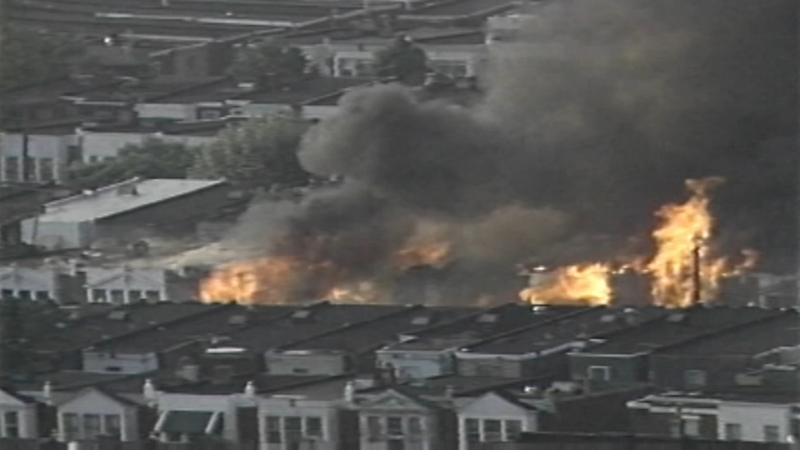 PHILADELPHIA (WPVI) -- It's been 35 years since one of the darkest days in Philadelphia history. The MOVE bombing carried out by police claimed 11 lives, and continues to be a source of controversy for the city.

May 13, 1985, continues to haunt the city of Philadelphia. It's the day police dropped a bomb on a house along Osage Avenue, occupied by members of a radical group called MOVE. Eleven people were killed, including five children. Two city blocks were burned and 61 homes were destroyed.

The largely African American community did not want MOVE in their neighborhood. Many complained about trash around the group's home, confrontations and obscene political messages from a bullhorn. An order to evict them turned into a violent episode that is a dark day in the city's history. Tensions erupted, there was a standoff with police and officers eventually dropped a bomb on the compound.

"My son, little Phil, was in the house he was only 12 years old," said Africa.

During the bombing, Africa was serving prison time for a 1978 confrontation that her group had with police, which resulted in the death of an officer. She was released from prison in 2019.

Thirty-five years ago, Wilson Goode was mayor of Philadelphia. He has since apologized several times for the bombing. On this 35th anniversary, he called on current city leaders to apologize again. Goode declined an interview and referred Action News to his article in the Guardian newspaper.

"Show us. What good is an apology without the action behind it. Show us that you are sorry and that you never want something like this to happen again," said Africa.

Mayor Jim Kenney says there is no plans for the city to apologize.

"I think the most important thing about this issue is our administration's response to rebuilding that neighborhood. From 1986 on, there was a series of debacle when it came to redoing those houses and we are almost done now," said Kenney.

Eleven members of Philadelphia City Council have called to make May 13 an annual day of reflection.

In a statement, they said in part, "Today, on the 35th anniversary of the MOVE bombing - a brutal attack carried out by the City of Philadelphia on its own citizens - we offer an apology for the decisions that led to this tragic event and announce our intent to introduce a formal resolution to this effect later this year. We call upon the City of Philadelphia to declare May 13th an annual day of reflection, observation, and recommitment to the principle that all people are created equal and endowed with inalienable rights to life, liberty, and the pursuit of happiness. Additionally, we call on all people of the City of Philadelphia to work toward eliminating racial prejudices, injustices, and discrimination from our society."

"We don't want money or museums or anything like that. We want to be left alone and for this city to acknowledge that MOVE is not guilty of any crimes," said Africa.

Former Mayor Goode says this event will remain on his conscience for the rest of his life.

"Today, on the 35th anniversary of the MOVE bombing - a brutal attack carried out by the City of Philadelphia on its own citizens - we offer an apology for the decisions that led to this tragic event and announce our intent to introduce a formal resolution to this effect later this year. We call upon the City of Philadelphia to declare May 13th an annual day of reflection, observation, and recommitment to the principle that all people are created equal and endowed with inalienable rights to life, liberty, and the pursuit of happiness. Additionally, we call on all people of the City of Philadelphia to work toward eliminating racial prejudices, injustices, and discrimination from our society.

On May 13, 1985, as part of an effort to forcefully evict MOVE, a revolutionary black liberation group, from their home at 6221 Osage Avenue, police fired over 10,000 rounds of ammunition in under 90 minutes at a row house containing children. City officials then made the unconscionable decision to drop a bomb on the home. The resulting explosion sparked a fire, which authorities let burn, not calling firefighters to the scene until nearly an hour later. By the time the decision was made to fight the fire, it was already out of control. Five children between the ages of seven and thirteen, along with six adults, perished in the MOVE house. Two full city blocks were burned to the ground, destroying 61 houses and leaving 250 Philadelphians homeless.

An investigatory commission set up by the Goode Administration concluded that city officials' decision to bomb the MOVE house was "reckless, ill-conceived and hastily approved." The commission recommended criminal investigations and charges, but a grand jury decided that these charges were unjustified. To this day, not one individual has faced criminal consequences or been held accountable in any meaningful way for this act of blatant aggression.

MOVE members, Cobbs Creek residents and property owners, and Philadelphia as a whole have waited far too long for this recognition, which serves as validation of their enduring pain. We also acknowledge the physical, mental, and emotional harm caused on May 13, 1985 to non-complicit public servants and their families as a result of following official orders issued by city leadership. As public officials, we have a responsibility to address this trauma, and to make a good-faith effort to right the wrongs of the past. The City has worked to rebuild the properties, and to provide monetary compensation to former homeowners along with the MOVE organization; however, that is not the same as a genuine apology that recognizes the massive failure in leadership that took place that day.

There are echoes of the MOVE bombing that persist in Philadelphia's police-community relations. Historical discrimination against people of color and unnecessary use of force has shaped a culture of distrust between police and residents. Perhaps Philadelphia could have been set on a different path, had the bombing been widely condemned in the aftermath. But it wasn't, and we are still living with those consequences today.

An apology is more than a symbolic gesture - it's a starting point for conversations on reconciliation, that can build towards a more just and equitable future. We are committed to remembering the devastation that took place on this day 35 years ago, in order to heal the impact of this tragedy and prevent similar such occurrences from happening in the future.

We apologize for the decisions leading to the devastation of that day, and acknowledge the fundamental injustice, cruelty, brutality, and inhumanity of the MOVE bombing. As members of Council, we acknowledge the significant failures in communication, negotiation, and conflict resolution leading up to and following these tragic events.

The work of Mike Africa, Jr., Ulysses Slaughter, Gabriel Bryant, Dr. Pauline B. Thompson, Eric K. Grimes, and a community of activists working tirelessly for justice have been invaluable in this effort. Their commitment has brought critical conversations to light, allowing the process of true healing to begin - and we thank them.

We plan to formalize this apology with a Council resolution later this year. This is a timely opportunity for us as public servants to recommit ourselves to acknowledge all of our history and work towards eliminating injustice from our society."