Mural honors Philadelphia's Freedom Fighters under leadership of Cecil B. Moore in the 1960s 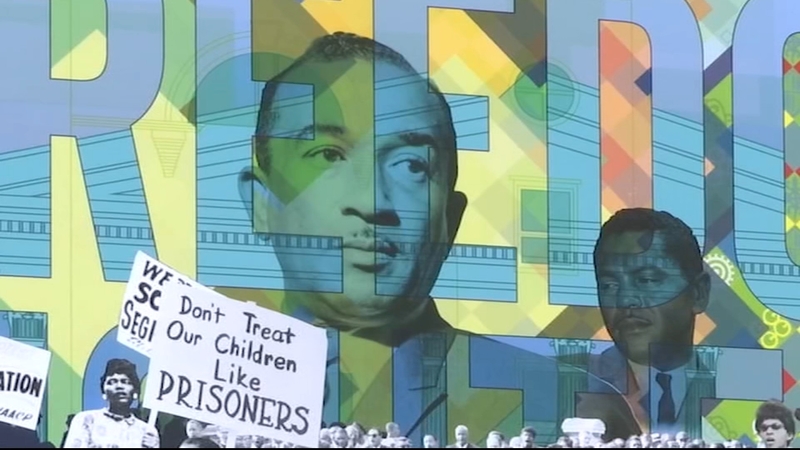 PHILADELPHIA (WPVI) -- Mural Arts Philadelphia has unveiled a design for a new mural honoring Philadelphia's Freedom Fighters in the 1960s that will be installed at Girard College.

The mural pays tribute to the young men and women under the leadership of former Philadelphia NAACP President Cecil B. Moore.

Karen Asper Jordan spoke Friday afternoon at Girard College; she is one of the Freedom Fighters mentored by the civil rights activist. She joined the movement when she was 16 as a North Philadelphia native.

"He (Cecil B. Moore) was our mentor, he was our protector, and he was our voice," Jordan said.

The unsung heroes in the 1960s got into "good trouble," in the words of the late Rep. John Lewis.

Outside the walls of Girard College, they held a seven-month-long demonstration which led to the school being desegregated in 1965.

Girard College is a boarding school for underprivileged children coming from single-parent households.

The mural, designed by local artists Felix St. Fort and Gabe Tiberino, captures the movement from the 1960s and incorporates West African concepts.

Leaders with Girard College say the project speaks to the institution that it is now.

"The fact that more than 90% of our student body is Black and beautiful is a testament to the last impact of the Civil Rights Movement," Vice President of Advancement Sylvia Bastani said.

The mural is anticipated to be up in the spring on the corner of North 22nd Street and College Avenue.