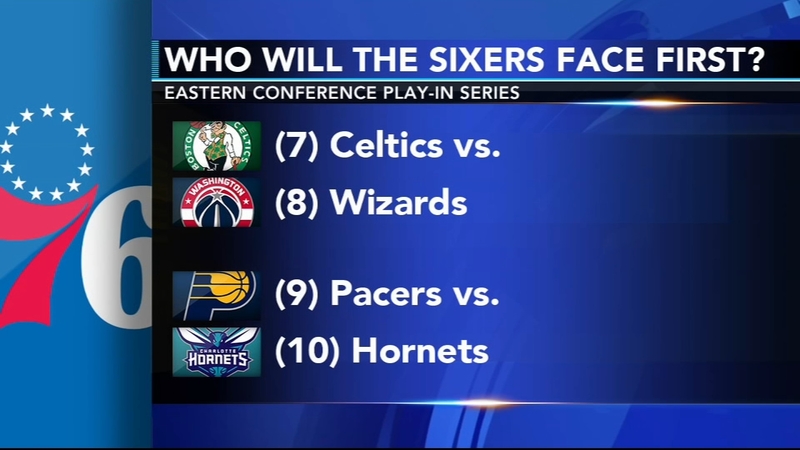 PHILADELPHIA -- The Philadelphia 76ers will open the NBA Playoffs Sunday at home.

But who will Joel Embiid, Ben Simmons, Seth Curry, Danny Green and Tobias Harris be playing against on the Wells Fargo Center court?

#1 Sixers will open the playoffs Sunday at home vs TBD the NBA announced pic.twitter.com/XALxKj0Noi

That is yet to be determined.

The 76ers will face either the No. 7 seed Boston Celtics, No. 8 Washington Wizards, No. 9 Indiana Pacers or No. 10 Charlotte Hornets in round one of the playoffs.

It all depends on what happens in the Play-In Tournament which begins Tuesday night.

1️⃣ Sixers await play-in tournament results to find out who they will play in the 1st round of the playoffs #Sixers pic.twitter.com/5oVlLMpeCM

And the winner of that game will advance to face the 76ers in a best-of-seven series.

Did you get all that?

If not, let's have 76ers legend Charles Barkley try to explain the Play-In Tournament like only he can.

Charles attempts to explain the play-in tournament on this edition of "Chuck Talks" 🤣 pic.twitter.com/DGdZVHv0Fd

ESPN says the biggest concern for the 76ers going into the playoffs is: "Can this team score enough? Setting aside the obvious potential for injury, no one questions Philadelphia's ability to play suffocating defense when it is whole. But the 76ers' second-ranked defense is superior to the team's 13th-ranked offense, which can tend to get bogged down, especially when its streaky 3-point shooters start missing. Then there's the issue of scoring late in games -- that has been a problem in Philly for years -- and it remains to be seen whether this season's team will solve it."

The 76ers ended the season 49-23 and earned the top seed in the Eastern Conference.

1️⃣ Sixers clinch the #1 seed in the Eastern Conference!!!

1st time the Sixers clinched the #1 seed since Allen Iverson and the 2001 team went to the NBA finals!! #Sixers pic.twitter.com/DoLeaFK7Z5