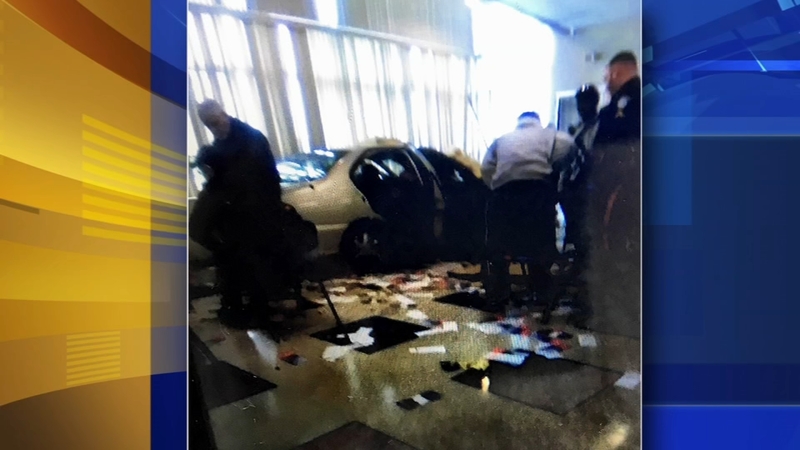 EGG HARBOR TWP., N.J. (WPVI) -- At least 21 people were injured after a vehicle crashed through the wall of a Social Security office in Egg Harbor Township, New Jersey on Tuesday morning.

A woman who was struck while inside the building is in critical condition.

The crash happened just before 10:30 a.m. near the intersection of Fire Road and Doughty Road.

Investigators say the Nissan sedan was driven by 56-year-old Donna Woodall from Atlantic City. She had a female passenger and two children inside the car.

We caught up with Anna as she left AtlantiCare Hospital in Atlantic City where she was treated and released.

"Just bumps and bruises and, you know, I think the most important thing is that I'm just traumatized because I never experienced such a disaster with so many people before," she said.

Witnesses say one woman ended up pinned beneath the vehicle. Gary Dixon says he was the one who pulled that victim to safety before medics arrived.

"Honestly, I don't know how I did it. I mean, I pulled the lady out from underneath the car and got her out and came to find out she's in very, very bad shape," he said.

At this point, all indications are this was simply an accident.

Car crashes into Social Security office in Egg Harbor Township. Watch this report from Action News at Noon on November 13, 2018.

"I got a headache and a lot of pain myself, but nothing compared to what I'm sure this lady is going through. It's hard to explain. It was really bad," said Dixon.

The building has been deemed structurally unsound.