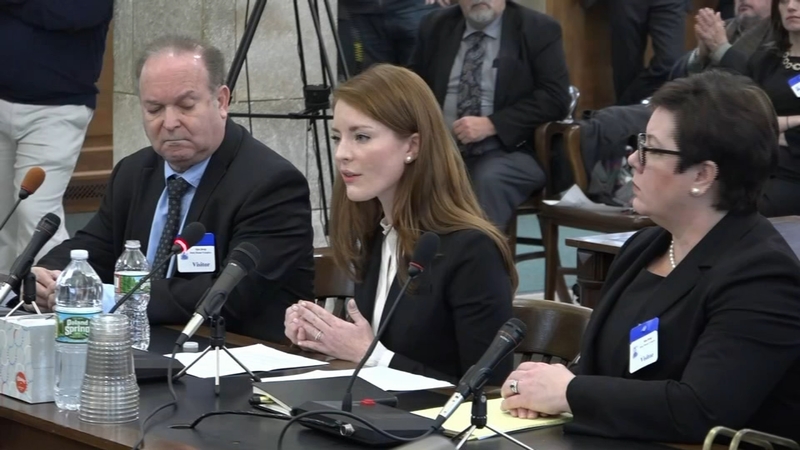 TRENTON, N.J. -- A state government employee told a legislative committee Tuesday that her allegations of sexual assault against a campaign staffer to Gov. Phil Murphy fell on deaf ears until she told her story to a newspaper.

Katie Brennan alleges she was assaulted by Al Alvarez, who led Latino and Muslim outreach during Murphy's campaign and later was named to a $140,000-a-year position at the Schools Development Corp. Alvarez, who has denied the allegations through his attorney, resigned from his position in October.

Brennan, the chief of staff at the New Jersey Housing and Mortgage Finance Agency, told the bipartisan committee investigating Murphy's screening and hiring practices that she attempted to go through the proper channels but only saw results after she told her story to the Wall Street Journal.

She alleges she was sexually assaulted by Alvarez in April 2017 when they were both working to get Murphy, a democrat, elected. She said she came forward because not enough was being done about the alleged assault.

The Associated Press does not typically identify people who say they are victims of sexual assault unless they grant their permission or come forward publicly, as Brennan did.

Brennan told the committee that a campaign attorney had told her Alvarez would be leaving the administration but that weeks passed while he remained in his job.

Prosecutors in Hudson County, where Brennan reported the allegation last year, did not bring charges. State Attorney General Gurbir Grewal's office reopened the case this fall and transferred it to Middlesex County after it came to light that Hudson County Prosecutor Esther Suarez realized she knew both Brennan and Alvarez.

Suarez has said she wasn't involved in the 2017 investigation and didn't realize the two were at the center of it until a reporter approached her this fall. She said the four investigators and two supervising assistant prosecutors handled the investigation properly.

Murphy has said he believes his office acted appropriately, but in October he hired former state Supreme Court Justice Peter Verniero to conduct a review.