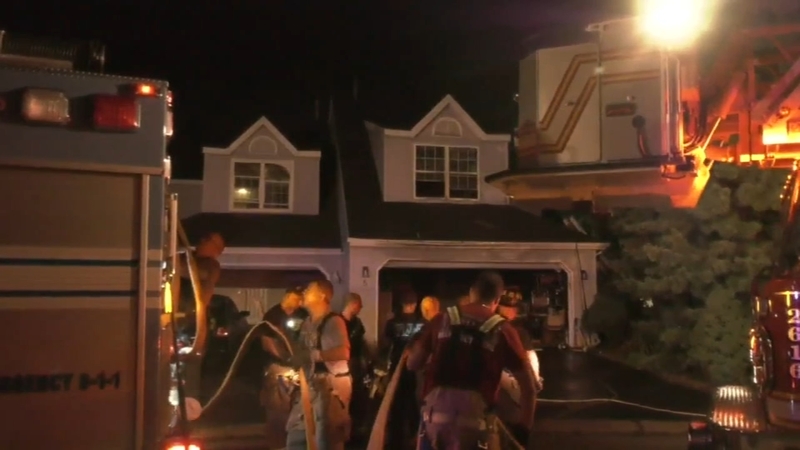 Early this morning just after 2:30 a.m., his neighbors' home on Phillips Court, which is connected to his home, caught fire.

"Somebody rang my doorbell about 6, 7 times and nobody was there. So I came out the front and I see through this window right here black smoke and the father was screaming," said Finn.

Inside the burning house was his neighbor along with his two very young boys.

Finn says he looked through the garage but the first floor was engulfed in flames and he realized there was only one way out.

"I was screaming obviously. I said listen you're the only option is coming out that window," said Finn.

At first, Finn says the smoke coming out was so thick his neighbor couldn't find the second-floor window.

Next, he grabbed the only ladder he could find and climbed up to the top.

When asked what did he do, slide the kids down? He said, "So I got up and I think I was on the top step of it and I grabbed a kid fed him down and grab a kid and fed him down.

Finn says others neighbors came out to grab the kids.

When he handed them down to safety that's all that mattered.

"Oh it was just a good feeling and I had a neighbor, another Good Samaritan and she was at the bottom of the ladder holding it cause I was shaking myself and getting each kid to her," Finn said.

But the work wasn't over.

Their dad was still trapped inside and the fire was only getting more intense.

But Finn says they remained as calm as they could and got him out.

"And thank god, eventually he got to the window and one by one we got them down," he said.

The children's mother was not home when the fire broke out.

She visited her home today with fire marshals.

She told us her kids are okay. They've been released from the hospital.