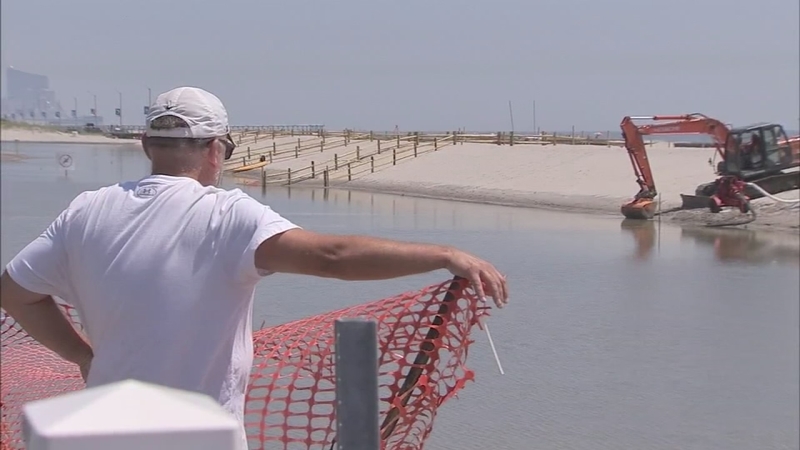 The Army Corps has brought in pumps to help with drainage, but homeowners still cannot access their beaches.

It's a mess that neighbors have dubbed 'Lake Margate.'

The newly dug basins were supposed to act as short time buffers. Rain runoff was supposed to drain away or percolate into the sand in 24 to 36 hours, but days after Saturday's storms, stagnant ponds persist.

Frustrated longtime residents figure an 8-year-old would know - dig deep enough at the beach and you hit water.

"Any elementary school kid would've known that that area, it was already saturated sand, it could not absorb anymore. It was impossible," resident Patti Deroo said.

As a remedial fix, pumps were brought in Tuesday to move the basin water onto the other side of newly constructed dunes, but the water pooled there. Plan B is now to pump the basin water directly into the ocean.

Mayor Becker is questioning the quality of water that will be pumped out of the basins and into the ocean. He has preliminary indications that there was some contamination. Results are pending on water quality reports.

While some beach walkways were closed, people made it to Margate's shore, but it was only a fraction of a normal summer crowd.

Resident Rick Beroth said there is usually 10 to 20 times more people on the beach this time of year.

The beach dune project is controversial.

Mayor Becker says the current basin issue has angered residents so there is now talk of going to court to stop the current work.

"We are having a special meeting tomorrow, which point of the discussion will be whether to hire an attorney to apply for a temporary restraining order. At this point, I am positive that that'll pass," Becker said.