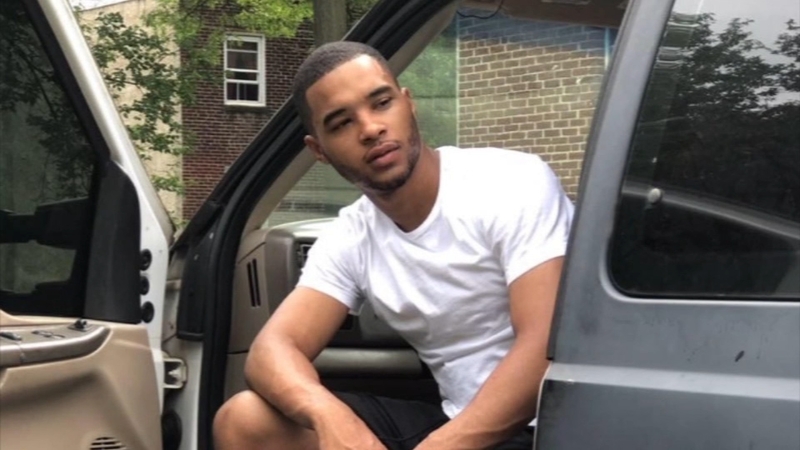 CAMDEN, N.J. (WPVI) -- Police have filed murder charges in the kidnapping and death of the Camden City Council president's grandson.

Brandon Beverly, 32, is now charged in the murder of 20-year-old Curtis Jenkins III.

Jenkins III's body was found late Tuesday night in the 1100 block of Liberty Street in Camden, just hours after police made an arrest in his kidnapping.

Authorities say the cause of death has been ruled as asphyxia, and the manner of death determined to be homicide.

Police said Jenkins III was reported missing on Monday and last seen near the 2700 block of Congress Road, just five minutes from his home.

The affidavit of probable cause says an informant came to police after speaking with Beverly. The informant claimed that Beverly admitted to kidnapping Jenkins, shooting him once inside of a van, then dumping Jenkins' body in an abandoned garage on the 1100 block of Liberty Street. The charging document also states that Jenkins was found with a plastic bag over his head. He was pronounced dead at 10:10 p.m.

Sources tell Action News that Jenkins' father received a photo of his son by the alleged kidnappers threatening harm if a ransom was not paid.

Then just hours before police discovered the victim's body, they arrested Beverly on charges of kidnapping and aggravated assault related to the disappearance of Jenkins III, but those charges were later upgraded to first degree murder.

"First degree murder carries a mandatory life imprisonment because it was done in the act of a kidnapping," said Bill Townsend, Chief of Detectives for the Camden County Prosecutor's Office.

Chief Scott Thompson said that he believes this was not a random act but rather a calculated plot to entrap and abduct the victim.

Court documents show that Beverly was arrested at his home in Woodbury, New Jersey on Tuesday.

Jenkins III had a food delivery service out of his home and was delivering an order just before he went missing, his family said.

Family members believe he was led to a false address. However, police have not confirmed those details.

"Somebody ordered food that he had cooked. Somebody placed an order and asked for delivery. And when he got there, it was like a false address," said Curtis' aunt, Lynette Jenkins.

Investigators say the calls made to Jenkins' father for ransom were made on a cellphone stolen from a victim of an earlier armed robbery on Third Street and Kaighn Avenue.

That cellphone was found in Beverly's home, along with a handgun.

As authorities canvassed the area searching for leads, family and friends clung to hope at a vigil late Tuesday night.

"With each passing hour when you don't hear anything, it just doesn't seem real that it's happening to this family," said Curtis' grandfather, Camden City Council President Curtis Jenkins.