Shipwreck revealed on shore beach could be 1880s schooner 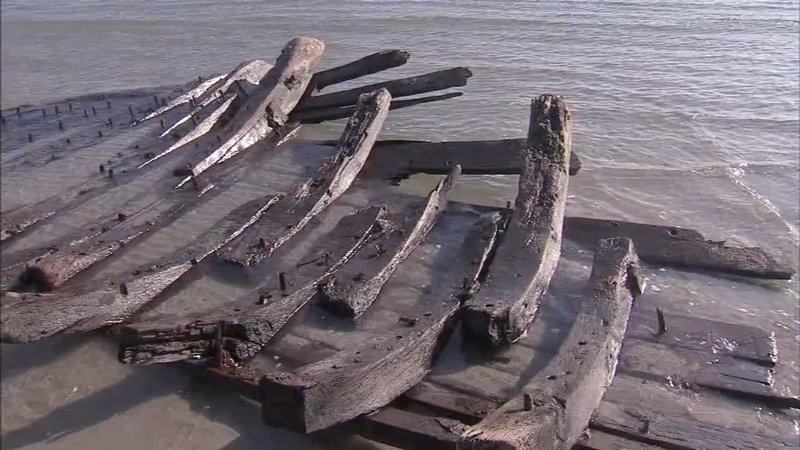 Shipwreck revealed on shore beach could be 1880s schooner

STONE HARBOR, N.J. (WPVI) -- Shifting sands in Stone Harbor, New Jersey have uncovered what is believed to a wrecked ship from the late 19th century.

The approximately 25-foot-long vessel's remains were visible on the southern part of the beach over the weekend.

Stone Harbor Point had scores of visitors Thursday, walking a mile to see for themselves something unexpected from another time.

"Oh, it all impresses. This is you know history, it washed in, it's crazy," said Joan Keating of Stone Harbor.

Massive wood ribs and timbers held together with wood pegs and copper nails could be seen.

It seemed to appear days before Christmas.

Jonathan LaKose, OEM Coordinator said, "At the time it was discovered we had a strong southeast gale that came through here, and it's my assumption that that caused shifting sands to expose it. My best guess, we'll get a northeast gale and most likely cover it back up."

But now it is a popular attraction. Most just snap pictures, but there is evidence of vandalism. Authorities think someone used a power saw to cut off a timber, prompting this mayoral appeal.

Stone Harbor Mayor Judy Davies-Dunhour said, "Please do not touch it, don't take anything from it. Just sit and look at it, read the story of what this ship could possibly be and just have respect for the maritime history."

One theory this is part of the schooner D.H. Ingraham that burned and sank very near here in a blinding snowstorm in 1886.

Local lifeguards rowed for hours to save the entire crew.

But says the president of the Stone Harbor Museum there were many historic wrecks in the area. There is no way to confirm this belonged to the 1886 sinking.

"That was an incredible rescue but whether it's the Ingraham I have no idea. We don't have somebody's name on there. There is no black box we can dig up," said Jim Talone.

This is a shipwreck with many questions. Is it part of the Ingraham? Why did it show up when it did, what will become of it?

Shipwrecks are not an uncommon sight along the New Jersey shore. In 2014, the U.S. Army Corps of Engineers discovered the remains of a 100-to-200-foot-long ship buried under a jetty while making repairs to the Barnegat Inlet jetty after Superstorm Sandy.