Some residents in New Jersey spent the day digging out after more than a foot of snow fell in some towns.
WPVI
By Trish Hartman 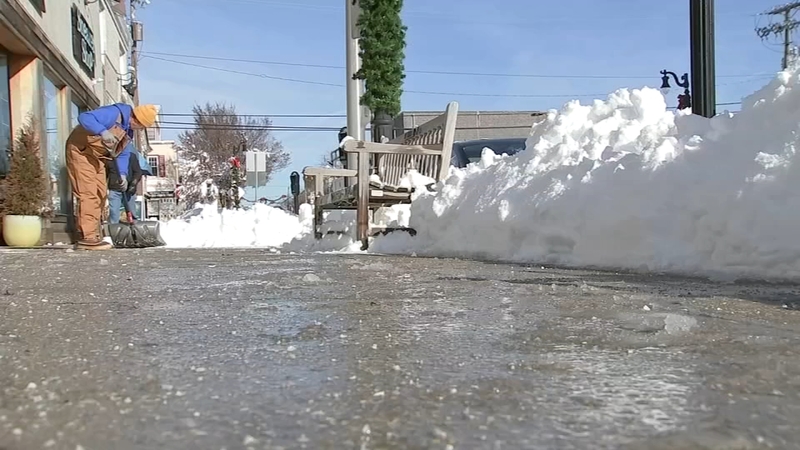 ATLANTIC CITY, New Jersey (WPVI) -- While some parts of New Jersey barely got any snow, the closer you got to the coast, the higher the totals.

The heavy snow caused some damage at the shore. In Ocean City, the roof of GG's Diamond Cleaners collapsed in the 600 block of Asbury Avenue.

No one was inside and no injuries were reported.

Two families who live in adjacent apartments were evacuated while the structure was inspected.

"We came in this morning and we saw the roof caved in," said Kyle Millevoi, whose stepfather owns the dry cleaning business, as they waited for engineers to assess the damage.

"With 10 inches of snow and how heavy the stuff is, you know we're plowing here and stuff like that. It's crazy," said Millevoi.

For many, it was a cleanup day with shoveling and salting happening up and down Asbury Avenue.

Wallace's hardware was practically cleaned out of shovels and ice melt.

"It's a heavy snow. It was pretty wet to start and then it finished up pretty light so the top part is not bad but then you get to the bottom part it's pretty heavy," said Mike Wallace, owner of Wallace's Hardware in Ocean City.

But there was some time for fun for two friends building a snowman on the boardwalk.

"I'm enjoying the snow. Yesterday was too windy so might as well go out today," said Rob Malfitano of Ocean City.

People walked the boards, enjoying the novelty of snow at the beach.

"The sun's out, it's beautiful, and it's neat to see the boardwalk full of snow," said Rose Salugta.

Shore towns were also surveying for beach erosion on Tuesday.