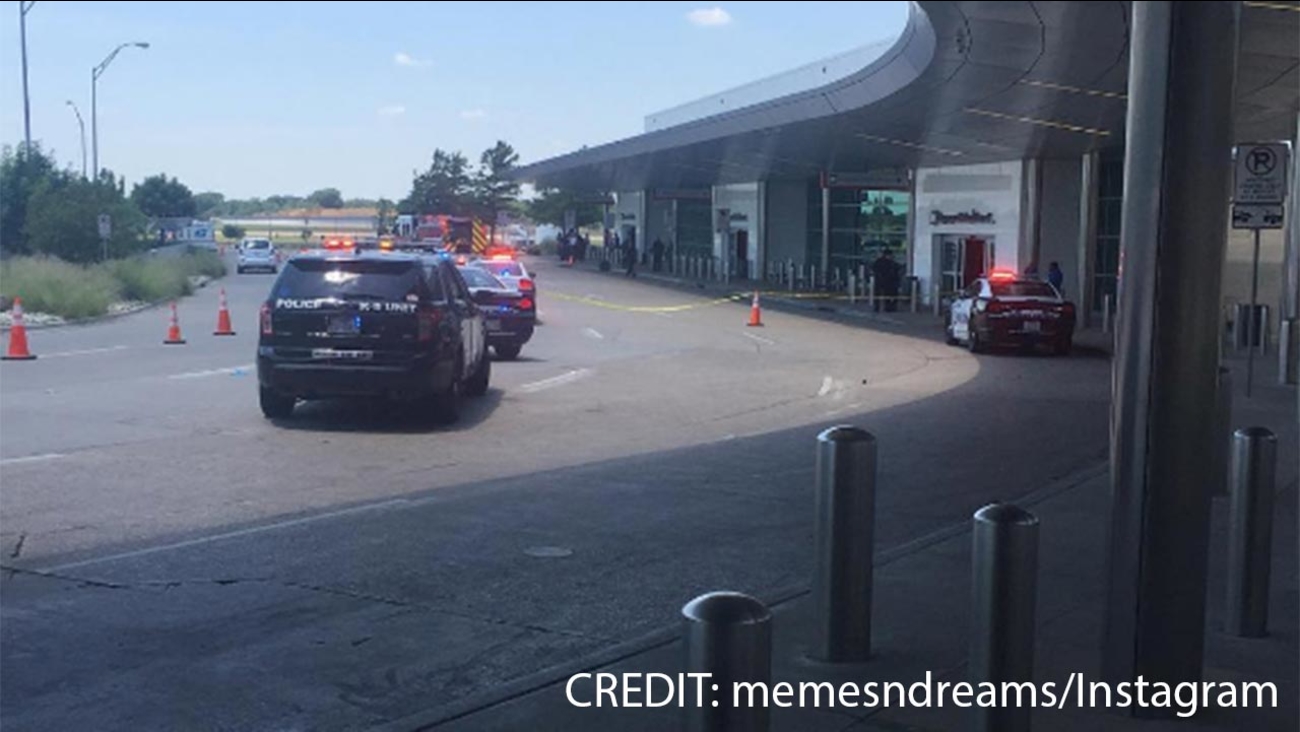 DALLAS -- A police officer shot and wounded a man Friday outside baggage claim at a Dallas airport after the man attacked a woman believed to be the mother of his children and then threatened the officer with a large rock, police said.

"There doesn't appear to be any other weapon present than the rock," Dallas Police Assistant Chief Randall Blakenbaker said.

Video posted by Instagram user flashyfilms- and credited to Bryan Armstrong shows people scattering on the sidewalk outside the baggage claim door at Dallas Love Field. An officer in a yellow vest is seen pointing his gun, and at least nine gunshots can be heard. A man repeatedly yells "stand down!" and a woman is heard screaming.

Asked why the officer fired so many rounds at a man holding a rock, Blankenbaker said only that he did not know how many shots were fired. "We have to conduct an investigation over those types of speculation."

There was an emergency shut down due to a shooting outside of Baggage Claim but we have reopened. Safety first.

Some airport operations were temporarily disrupted, but the airport remained open. Spokesman Jose Torres said that some people after hearing shots ran through security so everyone had to be rescreened. Officials warned that delays could last several hours.

"There were some folks in the security line who were startled, so they went through the security line without being checked. So the airport has had to pull everybody back out of the secure area and recheck them for security purposes," Blankenship said.

The man, who was not identified, was taken to a hospital. Torres said he was not critically wounded.

Traveler Lucinda Fonseca told WFAA-TV that she and her husband were coming out of the baggage claim area when they saw police approaching the man throwing rocks and one of the officers drew a gun.

"The man was yelling at the cops, basically saying 'shoot me shoot me, I dare you,' something to that effect," Fonseca said, adding she then heard gunfire.

We are open. Flights are departing with many delays. #LoveFieldShooting pic.twitter.com/stdIqCLe8h

"I crouched down on the ground," she said. "I didn't know where the bullets were going."

Blankenbaker said it appeared that the man had used a large rock from nearby landscaping to smash the windshield and driver's side window of a car. Blankenbaker said no children were present during the disturbance and the woman wasn't injured.

The officer, the lone law enforcement person involved in the incident, would be placed on administrative leave during the investigation, as per police policy, Blankenbaker said.

Police officers swarmed to Love Field but the airport was not closed, Blankenbaker said.

Southwest Airlines, the dominant airline at Love Field, said in a statement that vehicular traffic at Love Field was being routed around the active investigation scene. The airline advised that travelers be flexible to change plans that involve the airport Friday. They say they're working with air traffic controllers nationwide to manage inbound flights.