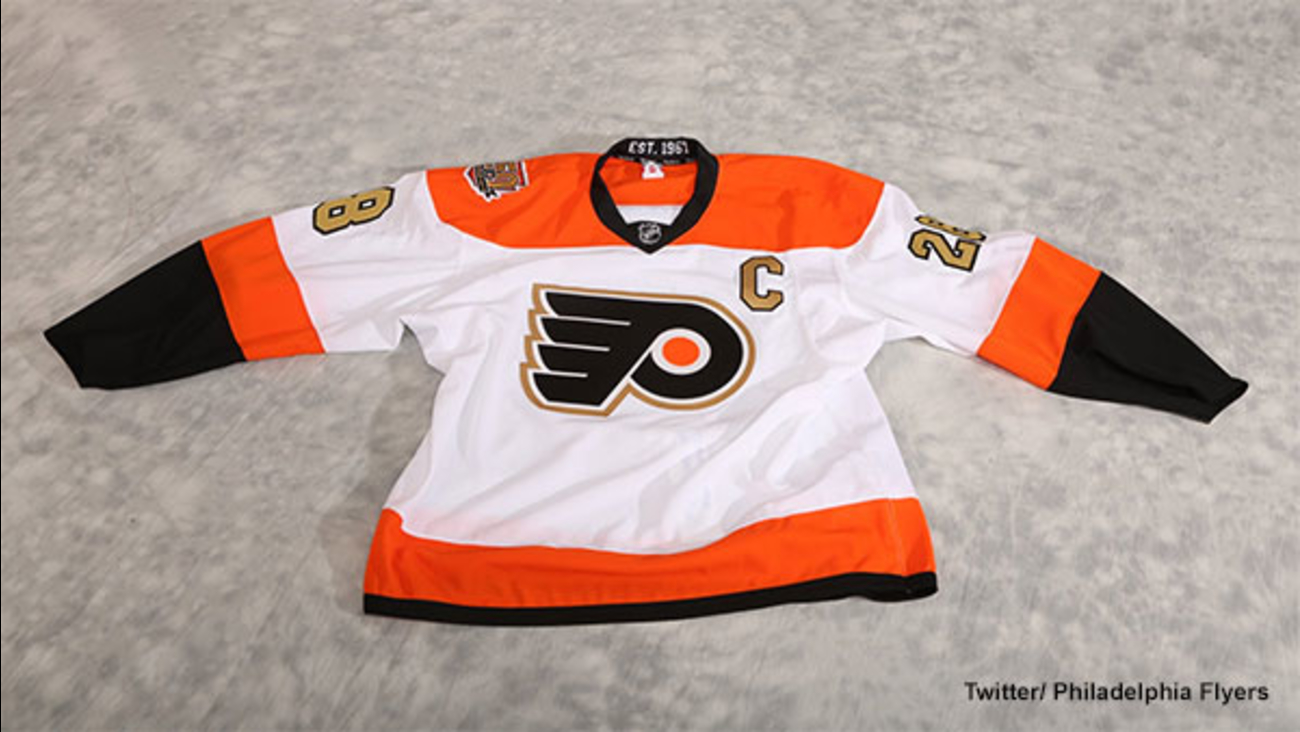 PHILADELPHIA -- In honor of their 50th season, the Philadelphia Flyers have unveiled a commemorative jersey.

The jersey has the Flyers' traditional black and orange colors with an added touch of gold.

See the 50th Anniversary jersey from every angle 👀 → https://t.co/YFLdSwHvh7 pic.twitter.com/SZqWrafi5n

"The club opted to integrate gold into the uniform, as well as in the Flyers campaign this season, as a nod to 50 years - what is often referred to as the 'golden anniversary.' Gold also serves as a symbol for the high standard and great achievements of the Flyers organization in its first 50 years," the team said in a statement.

Gold accents featured in the anniversary jersey include gold numbers on the back and sleeves, a three-color name plate, a gold-outlined crest on the front, and gold captain 'C' and alternate captain's 'A' patches, as well as additional gold accents on the pants and gloves. The jersey also features "Est. 1967" on the inside neckline, as well as newly-designed socks.

"It will be an incredible honor to be able to wear this anniversary jersey in front of our fans this season," said Flyers Captain Claude Giroux said in the statement. "It is a great tribute to this team's first 50 years. I know the team will play with pride wearing this on home ice."

@28CGiroux is looking alright in our new Sweaters! Can't wait to win some games in those! pic.twitter.com/q0Z7PwqSD8

The Flyers begin training camp in one week. Their regular season begins Friday, October 14 against the Los Angeles Kings. Their first home game sees the Flyers take on the Anaheim Ducks on Thursday, October 20.

Excited to be wearing these bad boys next year #50thAnniversary pic.twitter.com/vV0vE2HEJG

The specially-designed Reebok jersey will be worn 12 times at home during the 2016-2017 season: October 20 vs. the Anaheim Ducks (Home Opener), November 2 vs. the Detroit Red Wings, November 19 vs. the Tampa Bay Lightning, November 25 vs. the New York Rangers, December 3 vs. the Chicago Blackhawks, December 10 vs. the Dallas Stars, December 21 vs. the Washington Capitals, January 7 vs. the Tampa Bay Lightning, January 21 vs. the New Jersey Devils, February 2 vs. the Montreal Canadiens, February 4 vs. the Los Angeles Kings, and February 11 vs. the San Jose Sharks.

The 50th anniversary jersey will be available for purchase exclusively at the FanZone store at the Wells Fargo Center beginning Tuesday, September 6 through Saturday, September 10.

The Flyers say each season ticket holder will receive a free jersey beginning in September.