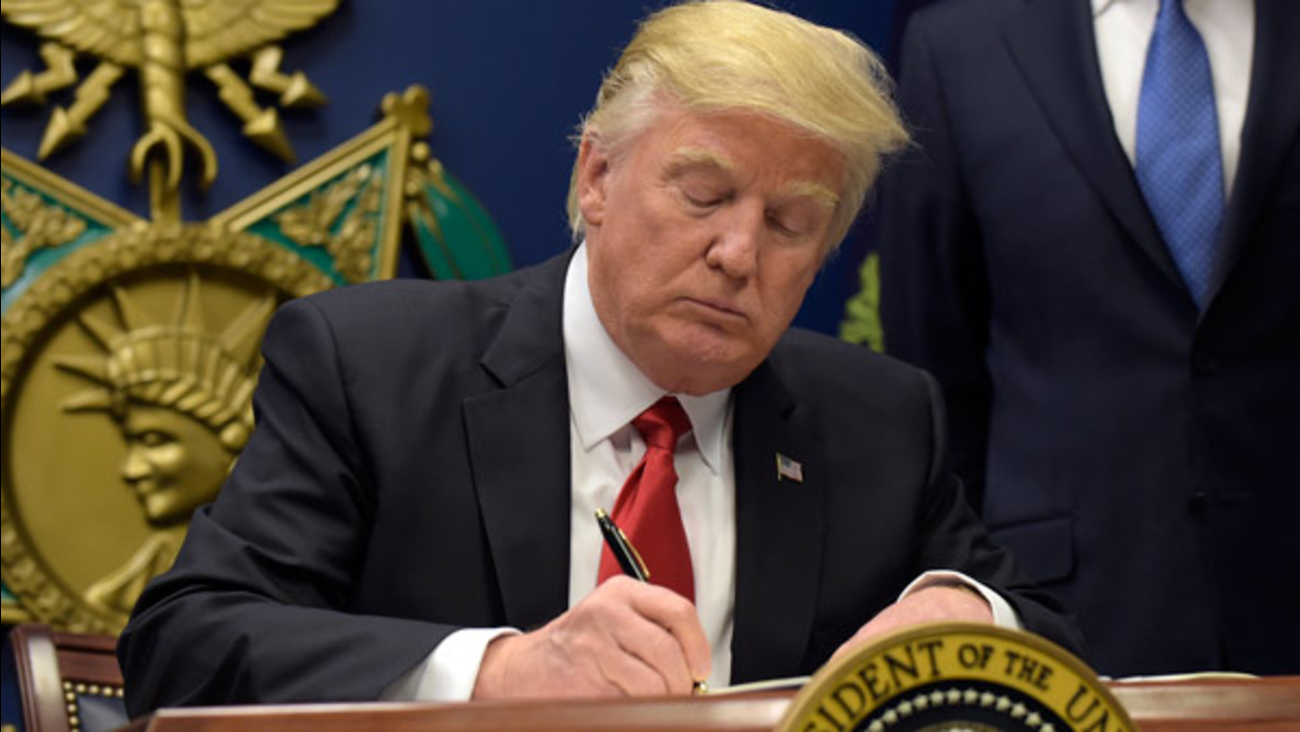 President Donald Trump signs an executive order on extreme vetting during an event at the Pentagon in Washington, Friday, Jan. 27, 2017. (AP Photo/Susan Walsh)

The Department of Justice blasted a court ruling that imposed a nationwide restraining order on President Donald Trump's immigration executive action, citing "national security" as a reason for it to be reinstated.

"The State argues...that the injunction does not impose any irreparable harm. But the injunction reinstates procedures that the President determined should be temporarily suspended in the interest of national security," the reply brief to the 9th Circuit Court of Appeals, filed Monday evening, says.

"The potential national-security risks and harms resulting from the compelled application of procedures that the President has determined must be reexamined, for the purpose of ensuring an adequate measure of protection for the Nation, cannot be undone. Nor can the effect on our constitutional separation of powers."

The DOJ also called Washington state Federal Judge James Robart's action "vastly overbroad, extending far beyond the State's legal claims to encompass numerous applications of the Order that the State does not even attempt to argue are unlawful."

Today, the appeals court scheduled oral arguments in the case for 3 p.m. PT on Feb. 7.

On Saturday, Robart agreed with the states of Washington and Minnesota that Trump's executive order -- which curtailed immigration and refugees from seven predominantly Muslim countries -- was likely to "to cause irreparable harm" to businesses, schools, family relations, and state residents' freedom to travel and issued a nationwide temporary restraining order blocking most parts of the executive order.

The Trump administration appealed to the 9th Circuit late Saturday night arguing that the president is acting within his authority and that the ruling by Robart "second-guesses the President's national security judgment."

Early Sunday morning, the 9th Circuit rejected the DOJ's request for an emergency stay on the restraining order.

Former Secretaries of State Madeleine Albright and John Kerry joined former national security and foreign affairs officials including Leon Panetta, Janet Napolitano, Lisa Monaco, and Michael Hayden and wrote a declaration to the appeals court that "there is no national security purpose for a total bar on entry for aliens from the seven named countries," adding that as a national security issue, the executive order was "ill-conceived, poorly implemented, ill-explained."

"The opinion of this so-called judge, which essentially takes law-enforcement away from our country, is ridiculous and will be overturned!" Trump tweeted on Saturday.

Trump has also tweeted that if something happens while his executive order is blocked, to blame the judge in the case.