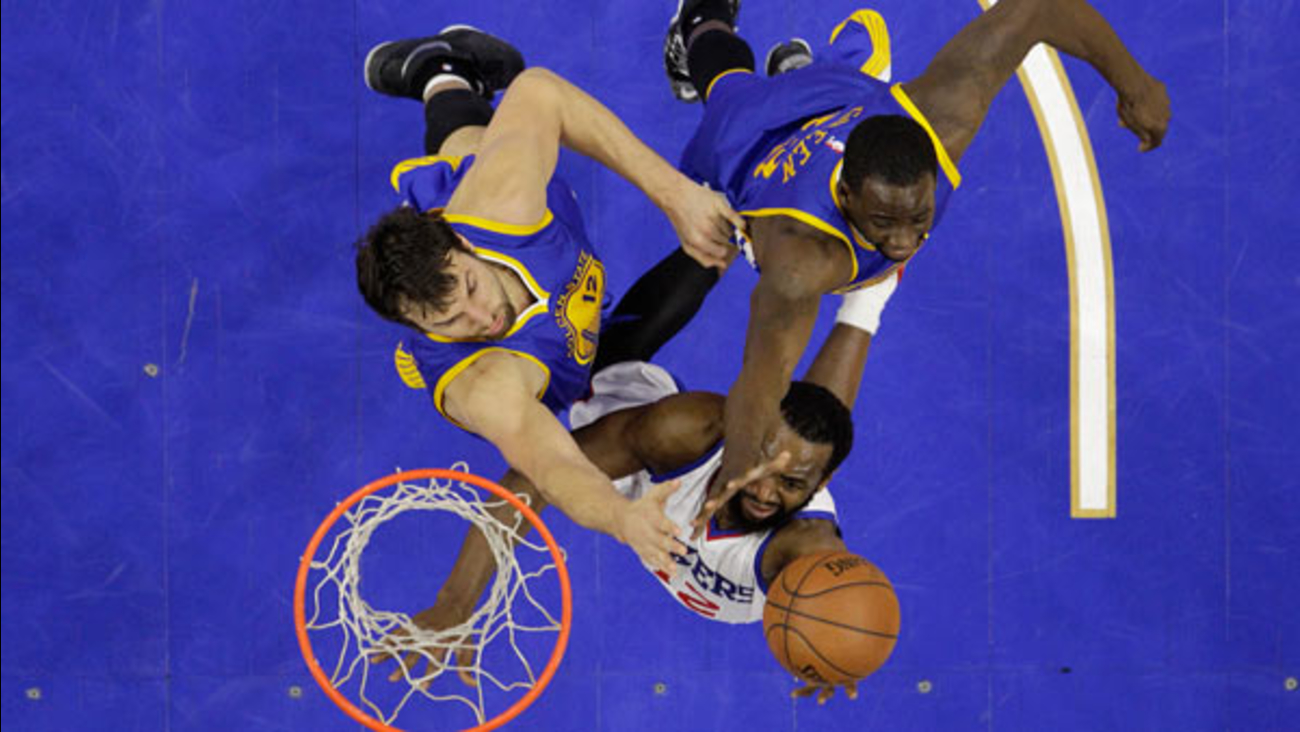 PHILADELPHIA -- Stephen Curry scored 20 points, Leandro Barbosa had 16 off the bench and the Golden State Warriors snapped Philadelphia's four-game home winning streak with an 89-84 win over the 76ers on Monday night.

Klay Thompson and former Sixer Andre Iguodala added 13 points apiece for the Warriors (41-9), who have won four of five and two straight after opening their four-game road trip with a loss to the Hawks on Friday.

Golden State, the NBA's second-best 3-point shooting team, shot just 7 for 29 from behind the arc.

With the game tied at 46 early in the first half, the Warriors reeled off a quick 9-0 run to take the lead for good.

Curry and Thompson, who each scored seven points on 1-for-5 shooting from 3-point range in the first half, sparked the surge and combined for 14 points in the first 8 minutes of the third quarter following their slow starts.

Former Sixer Marreese Speights scored three baskets early in the fourth quarter to help the Warriors go on a 16-2 run to take an 81-63 lead. The 76ers scored the next 12 points to pull within six, before Iguodala hit an acrobatic layup and Curry followed with a floater to put Golden State up 10 with 2:28 left.

The Sixers led for much of the first half and opened a 28-20 lead early in the second quarter on the strength of a 12-2 run. The spurt was highlighted by an electrifying play from K.J. McDaniels, who passed the ball to himself off the backboard and finished with a one-handed jam.

The Warriors quickly scored the next eight to tie the game, capped by Iguodala's dunk, and went into halftime with a two-point lead.

Starting point guard Michael Carter-Williams missed his third straight game with a finger injury for the Sixers, who are off for the next 11 days because of the All-Star break.

Warriors: Before the game, Curry hung out with 2014 AP Female Athlete of the Year Mo'ne Davis, who starred for Philadelphia's Taney Dragons in last summer's Little League World Series. The All-Star guard even asked for the 13-year-old's autograph. . Speights and Iguodala, both of whom were averaging more than 14 points per game coming in against the Sixers, combined for 23 points against their former team. Iguodala, who spent the first eight years of his career in Philadelphia, heard boos throughout the night.

76ers: Cincinnati Bengals defensive lineman Devon Still was honored before the game along with his daughter Lea, who is battling cancer. Still grew up in the area and starred in college at Penn State. . The Sixers have lost four straight to Golden State by a combined 108 points.