US ambassador to South Korea slashed in attack 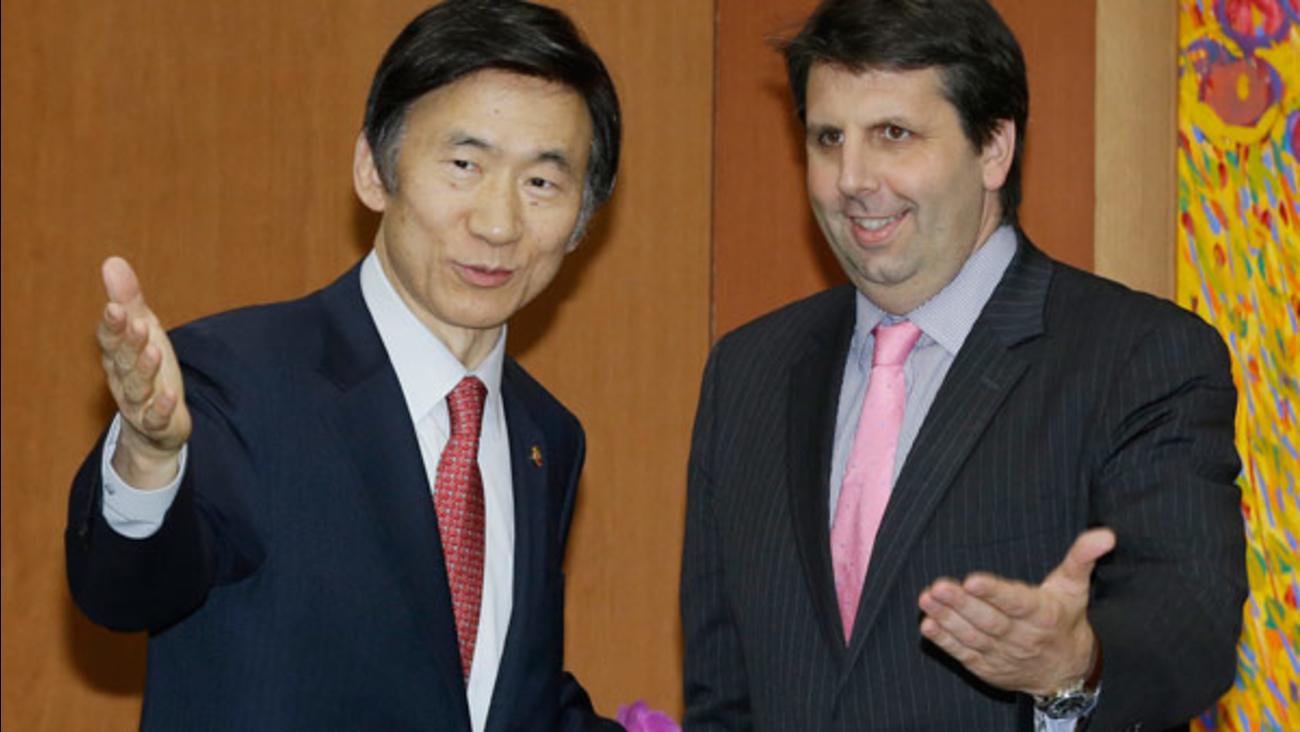 SEOUL, South Korea -- U.S. Ambassador Mark Lippert was slashed on the face and wrist by a man wielding a knife with a 10-inch blade and screaming that the rival Koreas should be unified, South Korean police said Thursday.

Media images showed a stunned-looking Lippert staring at his blood-covered left hand and holding his right hand over a cut on the right side of his face, his pink tie splattered with blood.

The U.S. State Department condemned the attack, which happened at a performing arts center in downtown Seoul as the ambassador was preparing for a lecture about prospects for peace on the divided Korean Peninsula, and said Lippert was being treated at a local hospital and his injuries weren't life threatening.

YTN TV reported that the suspect - identified by police as 55-year-old Kim Ki-jong - screamed during the attack, "South and North Korea should be reunified."

A witness, Ahn Yang-ok, the head of the Korean Federation of Teachers' Associations, told YTN that Lippert had just been seated for breakfast ahead of the lecture organized by the Korean Council for Reconciliation and Cooperation when a man ran toward the ambassador from a nearby table and slashed him with a knife.

Yonhap TV showed men in suits and ties piled on top of the attacker, who was dressed in a modern version of the traditional Korean hanbok, and Lippert later being rushed to a police car with a handkerchief pressed to his cheek. The suspect also shouted anti-war slogans after he was detained, police said.

A police official, speaking on condition of anonymity because the investigation was still happening, said the suspect in 2010 threw a piece of concrete at the Japanese ambassador in Seoul. South Korean media reported that in August 2010 that Kim Ki-jong was sentenced to a three-year suspended prison term over the attack. Kim, who was protesting Japan's claim to small disputed islands that are occupied by South Korea, missed the ambassador with the concrete and hit his secretary instead, the reports said.

The attacker's reported comments Thursday on Korean reunification are likely linked to lingering, deep divisions in South Korea that stem from the 1950-53 Korean War. The rival Koreas have been divided for decades along the world's most heavily armed border. The U.S., which backed South Korea during the war against China-backed Pyongyang, still stations 28,500 troops in South Korea as a deterrent against North Korea, and some South Koreans see the U.S. presence as a barrier toward a reunified Korea - a view North Korea's propaganda machine regularly pushes in state media.

Anti-U.S. protesters in Seoul have recently been demonstrating to voice opposition to annual U.S.-South Korean military exercises that North Korea says are preparation for an invasion. Seoul and Washington say the drills, which will run until the end of April, are defensive and routine.

North Korea each year reacts with fury to the drills, which the impoverished country is forced to respond to with drills and weapons tests of its own. In 2013 it threatened nuclear strikes on Washington and Seoul, and on the first day of this year's drills, Monday, it test-fired short range missiles in a demonstration of anger.

Lippert, 42, became ambassador last year and has been a regular presence on social media and in speeches and presentations during his time in Seoul. His wife gave birth here and the couple gave their son a Korean middle name. Lippert was formerly the U.S. Assistant Secretary of Defense for Asian Affairs and a foreign policy aide to President Barack Obama when Obama was a U.S. senator.

Obama called Lippert after the attack to express his thoughts and prayers for a speedy recovery, the White House said.

"We strongly condemn this act of violence," State Department spokeswoman Marie Harf said. She had no other details.