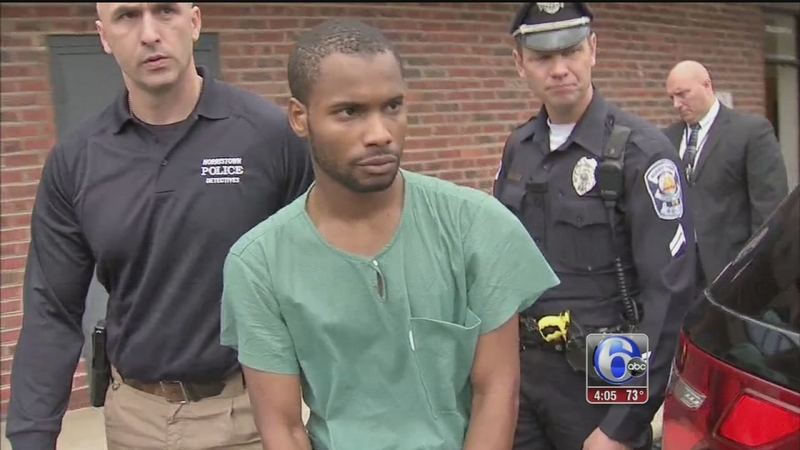 NORRISTOWN, Pa. (WPVI) -- Investigators say a jealous lover is behind a double homicide at his ex-girlfriend's apartment late Wednesday night in Norristown, Pa.

Police say Lewis' former girlfriend told them she had been dating one of the victims, 26-year-old Marcel Edwards of Philadelphia, and that Lewis always had a problem with Edwards.

She and Lewis had an on-again, off-again relationship for seven years, investigators said.

"The individual who was in the house was a lady who had relationships with both the defendant in this case and one of the victims, and they appeared to be overlapping," said Montgomery County District Attorney-elect Kevin Steele.

Lewis and the woman had a 4-year-old son, who was in the apartment, as Lewis allegedly approached the door and started shooting.

In a rage, screaming expletives, it's alleged he fired through the apartment's front door. Ultimately, authorities say he killed two men and continued to fire even after the victims fell.

The evidence, Steele said, indicated "the defendant stood over and fired down on the victims and the bullets went through the bodies and into the floor below."

Then, investigators say, Lewis then went after his ex-girlfriend.

"He went to her, dragged her by the hair, dragged her out of the closet where she was hiding, pulled her across the floor. There was indications of rug burns on her legs," said Steele.

The woman was able to escape and sought police. Officer Miguel Montoya came upon Lewis, who was allegedly still armed, and managed to get the gun.

"That gun was still hot from all the shots that had been fired, and Officer Montoya was able to safely recover it and avoid other loss of life in this case," said Steele.

In court records, Lewis' ex-girlfriend described him as both 'violent' and 'jealous.'

Also killed was 26-year-old Quentin Watson, Jr. of Eagleville, Pennsylvania, who happened to be in the apartment at the time of the shooting.

The 4-year-old was not harmed.