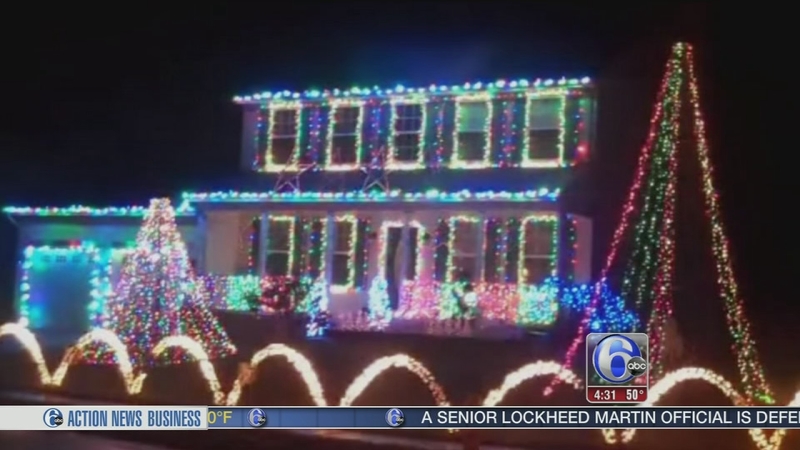 BURLINGTON TWP., N.J. (WPVI) -- A family in Burlington Township, New Jersey is hoping police can track down a real-life Grinch.

Ron and Marie Murdza's home, known during the holidays as "Burlington Lights," is back in the spotlight.

This, after they say the thief stole donated money from their Christmas display. That money was going to be given to help those in need.

Their home was previously featured on Action News, with lights synchronized to the Action News theme music.

But this time the circumstances are rather dim.

"I don't know how you could do it. Our neighbors are appalled. Everyone is in shock," Ron said.

Each year they set up their famous display on the corner of Steeplechase and Tack Way. Six years ago they started helping their favorite local charity, the Burlington Township Food Pantry.

"People started leaving money in my mailbox, and I didn't do it to make money, I did it because I enjoyed bringing Christmas spirit to everybody. So we started collecting for the food pantry," Ron said.

Ron is a fireman in Hamilton and, when he came home Sunday night after his shift, he realized someone robbed the charity money box.

"On a weekend as we get closer to Christmas the donations usually end up being a couple hundred dollars a night," he said.

Ron thinks they came in here with a crow bar or something similar and popped open the lock. Some screws from the box could still be seen on the ground Monday.

The thief or thieves took the cash, but left the coins.

We spoke with Domenic Zulla from the Food Pantry. He says the yearly contribution is vital to their budget now.

"We feed 110 families at Christmastime," said Zulla. "We depend on this fundraiser here to provide us the money we need."

The Murdzas say with all of the donations they've already got they know the Christmas spirit is alive and well.

And, if the suspect is out there watching, Ron has a message:

"It'll come back and bite you in the end," he said.

They have filed a police report.