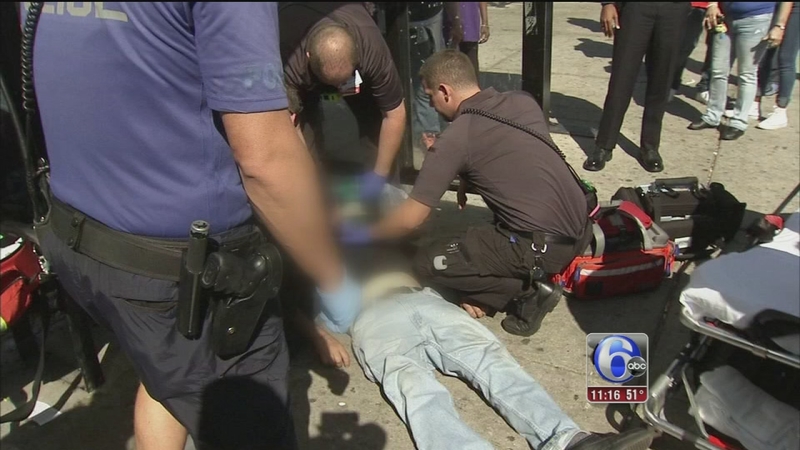 According to the DEA, the number of deaths attributed to heroin has tripled in the last five years.

Now, the duty to save lives has fallen not just to paramedics, but largely into the hands of our men and women in blue.

Every police department in Camden County has been armed with the life-saving drug Naloxone, also known as NARCAN.

"Within 15 seconds we can start to see the color come back to the person's face," Officer Tyrrell Bagby said.

There are critics who say addicts will just go back to using after being saved.

But law enforcement warns the alternative would be gruesome with dead bodies littering the streets of our nation's cities.

Across Camden County, officers have made about 600 saves, in the fight of their lives, battling the exploding number of heroin overdoses sweeping across the country.

Heroin user Michael Keppel, a former union carpenter, says he has been addicted to heroin since he broke his back in 2001. His life is now lived struggling on Camden's streets.

"It's an epidemic. You can't walk down the street without seeing an empty bag or a needle or a body," Keppel said.

And although he says he's tried to break his deadly addiction, Keppel admits it has total control of every day and every second of his life.

"I've been shooting heroin so long that the veins in my arms don't even work no more, I'm down to using my legs, feet," Keppel said.

"The person taking this drug really has the same urge as you to take your next breath to stay alive," Camden County Police Chief Scott Thomson said.

Thomson says his officers have learned to view these 'junkies' as people, sons and daughters, whose life might turn around, if they can be saved one more time.

"It's not our job as law enforcement officers to determine whose life is worth saving and whose isn't," Thomson said.

Thomson provided us with dramatic body cam videos that show users overdosing and what could be the last seconds of their life. People on the brink of death, brought back by his officers in a matter of seconds.

Kepple and other users in Camden have now started carrying NARCAN themselves through a program set up by Patti DiRenzo, who lost her son to a deadly overdose.

"There'd be a lot of dead bodies lying around if we didn't have it," Keppel said of NARCAN.

He begs on the street for money to survive.

"There are days I wake up wishing I didn't wake up," Keppel said.

But he says he still prays somehow he stays alive long enough to get loose of heroin's grip.

"Now if I can get off the stuff permanently, it would be an even bigger blessing," Keppel said.

Camden County has set up an addiction task force to try to get users into recovery programs for free.

"I'd like to think that people can change for the better," Officer Bagby said.

NARCAN, which is administered through the nose, costs about $30 a vial.

Chief Scott Thomson says it's well worth the price, even if they have to save the same person's life 20 times.
Related topics:
special reportheroinaction news investigationdrugs
Copyright © 2021 WPVI-TV. All Rights Reserved.
More Videos
From CNN Newsource affiliates
TOP STORIES