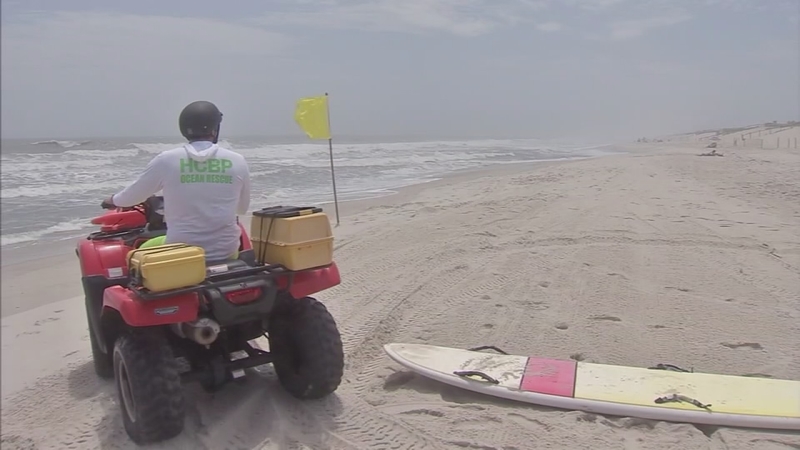 HARVEY CEDARS, N.J. (WPVI) -- Bathers at Harvey Cedars on Long Beach Island shouldn't be surprised if they see a lifeguard on an ATV patrolling the beach long after all the other guards have left.

The beach patrol has resumed its annual after-hours unit that will monitor beaches and be available to respond to emergencies.

"They are driving up and down the beach looking for people in distress who are swimming, informing the public of the conditions and the potential hazards," Harvey Cedars Beach Patrol Capt. Randy Townsend said.

The dayside guards are on duty from 10 a.m. to 5 p.m., but bathers don't necessarily leave when they do.

That was painfully clear last week. On Thursday evening, 16-year-old Kaliyah Hand and 15-year-old Ramon Quinn drowned in a terrible riptide in Atlantic City. That same night in Belmar, a 13-year-old girl died and her cousin is on life-support after being caught in rough surf.

"One riptide can suck you out to sea in a matter of seconds," Townsend said.

That's why people think having a night patrol from 5 p.m. to 8 p.m. makes sense.

"I think it's an awesome idea, just as a parent in general, to make sure that your children are safe whether they're 14 or 18 or 22," Kelly Waltman of Cherry Hill, NJ said.

This season has hardly begun and already three people have died in rough surf and rip currents in less than a week. The lifeguards want to do what they can to make sure that number doesn't go up.

"Quite often on night patrol, during dangerous conditions, we have people swimming in potential rip currents so we are always being vigilant," lifeguard Nate Hem said.

Hem, a 10-year veteran, knows firsthand that the night patrol makes a difference.

"While I was on duty, I've had one save of someone in a rip current. I called in, went out, got them, brought back them back in, it was all good," Hem said.