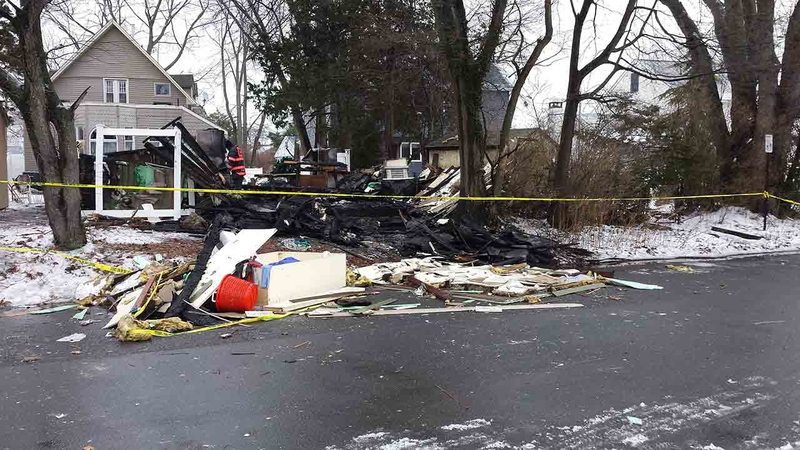 POINT PLEASANT BEACH, N.J. (WPVI) -- For the second time in less than a week there has been a gas explosion near the Jersey Shore.

This time a man was badly burned in Point Pleasant Beach, Ocean County.

The small cottage was completely destroyed.

Neighbors say they were shaken from their sleep.

Brian Kiddie tells us, "The house just disintegrated. I mean it was a big explosion it was like an inferno."

Kiddie and his wife Donna woke up to this morning and recorded gas fed flames at the cottage in the backyard next door on Crooks Lane in Point Pleasant Beach.

Kiddie says, "It was like a bomb going off. We woke up, the whole back yard was bright as can be. We looked out the window, by the time I got downstairs the guy living in the house got blown out the front door."

Donna Kiddie tells us, "I saw the guy that lives there he was on the ground screaming and we just called 911."

Authorities say the victim woke up at 1:40 a.m., smelled gas, and flicked the light on in the bathroom triggering the blast.

47-year-old Kurt Wagner, a crew member on a local fishing boat called the Tina, was burned over as much as 50% of his body.

He's in stable condition at a North Jersey burn center. He was due back on the boat first thing this morning.

Fellow fisherman Manuel Viana says, "Kind of guy you can count on being there all the time. So, I knew something was up I knew there was a problem. I tried to call him today early this morning and I didn't get no answer."

Investigators from several agencies spent the day looking through the rubble of the cottage.

New Jersey Natural Gas says after testing there are no leaks in the area and it's believed the leak came from within the cottage itself.

Detective Mitchell Remig from the Ocean County Prosecutor's Office says, "We know now that some type of explosion which took place we're looking into the cause of that."

Last Tuesday's gas explosion in Stafford, coupled with today's blast, is a reminder of what to do if you smell gas in your house. Don't turn on lights appliances or use the house or cell phone.

Michael Kinney of New Jersey Natural Gas explains, "Anything that could potentially cause a spark can create a serious situation. Turning on the lights, using a cell phone, anything. So the first most important thing you can do is if you smell natural gas, leave the premises immediately."