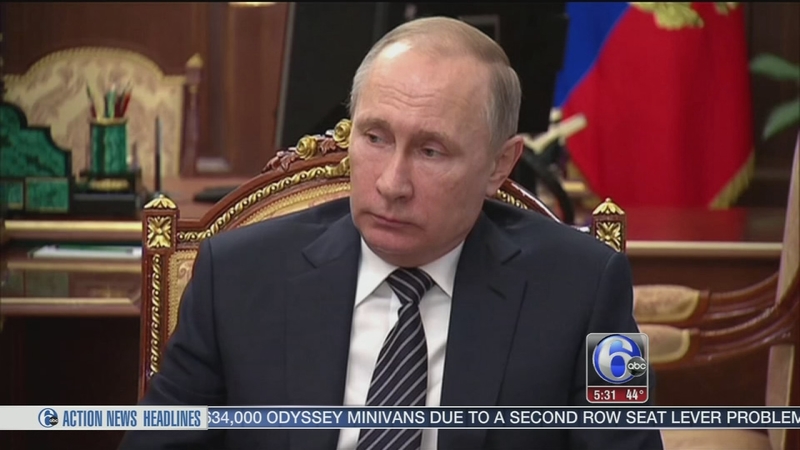 HONOLULU -- In a sweeping response to election hacking and other bad behavior, President Barack Obama on Thursday sanctioned Russian intelligence services and their top officials, kicked out 35 Russian officials and shuttered two Russian-owned compounds in the U.S. It was the strongest action the Obama administration has taken to date to retaliate for a cyberattack.

"All Americans should be alarmed by Russia's actions," Obama said, adding, "Such activities have consequences."

In a bid to expose Moscow's cyber aggression, the U.S. also released a detailed report about Russia's hacking infrastructure that it said was designed to help computer specialists identify compromised systems and prevent more hacking. And Obama said more action was coming.

"These actions are not the sum total of our response to Russia's aggressive activities," Obama said in a statement released while he was vacationing in Hawaii. The U.S. has previously left open the possibility it could mount a covert retaliatory strike.

The White House has promised to release a report before Obama leaves office detailing Russia's cyber interference in U.S. elections, a move that could address Russia's complaints that the U.S. hasn't shown proof of its involvement. But the U.S. moved forward with the response Thursday even as the report has yet to be released.

Still, Obama administration officials said the list of entities Obama was sanctioning made clear who exactly the U.S. believes was behind the hacking of Democratic groups and the theft of emails from Hillary Clinton's campaign chairman.

Obama amended an executive order issued in 2015, meant to combat cyberattacks, to authorize sanctions on entities "interfering with or undermining election processes or institutions."

Under this new authority, Obama ordered sanctions against two Russian intelligence services, the GRU and the FSB, plus companies that the U.S. says support the GRU. The cybersecurity firm hired by the Democratic National Committee to investigate theft of its emails determined earlier this year the hacking came from the Fancy Bear group, believed to be affiliated with the GRU.

The president also sanctioned Lt. Gen. Igor Korobov, the head of GRU, and three of his deputies. Other individuals sanctioned include Alexsey Belan and Yevgeny Bogachev, two Russian nationals who have been wanted by the FBI for cybercrimes for years.

Obama's move puts President-elect Donald Trump in the position of having to decide whether to roll back the measures once in office, and U.S. officials acknowledged that Trump could use his executive authorities to do so.

U.S. allegations of hacking during the campaign have ignited a heated debate over Trump's approach to Russia and his refusal to accept the assessment of U.S. intelligence agencies that Russia's government was responsible and wanted to help him win. Though U.S. lawmakers have long called for Obama to be tougher on Russia, some Republicans have found that position less tenable now that Trump is floating the possibility of closer ties to Moscow.

"While today's action by the administration is overdue, it is an appropriate way to end eight years of failed policy with Russia," said House Speaker Paul Ryan, R-Wis.

Obama said the hacking "could only have been directed by the highest levels of the Russian government," a contention the U.S. has used to suggest Russian President Vladimir Putin was personally involved.

Although the White House announced at the same time it was kicking out Russian officials and closing facilities, it said those were responses to other troubling Russian behavior: harassment of U.S. diplomats by Russian personnel and police.

The 35 Russian diplomats being kicked out are intelligence operatives, Obama said. They were declared "persona non grata," and they were given 72 hours to leave the country. The State Department declined to identify them.

Fyodor Lukyanov, the head of Council for Foreign and Defense Policies, an association of top Russian political experts, called the decision to expel 35 Russian diplomats "a Cold War-like diplomatic war."

Lukyanov said on Rossiya 24 television that because of Thursday's sanctions the Trump administration "will have to start off from an even lower point than it was" in trying to mend the U.S.-Russia ties.

"I think the new administration will try to soften the blow and at least distance itself from, to show this has nothing to do with them," he said.

The two compounds being closed down are recreational facilities owned by Russia's government - one on the eastern short of Maryland and the other on Long Island, New York - that were also used for intelligence activities, the U.S. said. The White House said Russia had been notified that Russia would be denied access to the sites starting noon Friday.

Russian officials have denied the Obama administration's accusation that the highest levels of the Russian government were involved in trying to influence the U.S. presidential election. U.S. intelligence agencies concluded that Russia's goal was to help Trump win - an assessment Trump has dismissed as ridiculous.

Stewart Baker, former general counsel for the National Security Agency and former head of policy at the Homeland Security Department, said the administration's public response to Russia's hacking activities was "better than nothing" but "more symbolic than real." He noted that Russia would likely retaliate with similar measures such as ejecting U.S. diplomats.

"On its face, this is more than a slap on the wrists but hardly an appropriate response to an unprecedented attack on our electoral system," Baker said.