Officials in Hamilton Township, Mercer County say employees have been allowed to re-enter the postal facility and resume operations following a hazmat incident on Friday.

There is still no indication as to what caused some workers to fall ill.

Several people reported feeling dizzy and nauseated, and at least one person passed out. 13 people were being treated at the scene and one person opted to go to the hospital.

The workers described a strong, sweet odor at the time.

Investigators have conducted air quality tests, but say so far they have not found anything. As a precaution, a hazmat team from the New Jersey State police - with more sensitive detection meters - was brought in to check the facility.

There is no word on what may have caused this situation. Investigators say no spills or powder residue have been found. 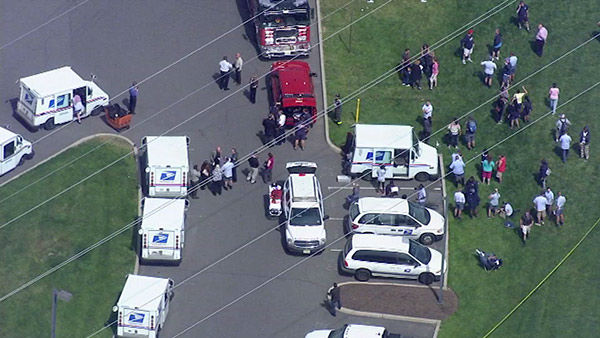 "All biologicals have been ruled out. At this point, we have not seen any evidence of any spills, powders, no liquid residue or anything like that," said U.S. Postal Inspector Reginald Wade.

There was a heightened sense of concern, considering a nearby post office was the scene of an anthrax attack back in 2001.

Meanwhile, officials say residents have been calling, concerned their mail has been contaminated. Officials say mail coming out of the facility has been screened for biohazards, so they are confident there is no danger in opening mail.

In addition, the facility is not accessible to the general public.

"The safety, security and well-being of everyone is our main priority. We are doing everything in our investigatory powers to get to the bottom of this issue. Everyone affected is being monitored and all appear to be doing fine. Only mail carriers with symptoms are being asked to return to the facility," said Wade.

About 130 postal employees work at the site.