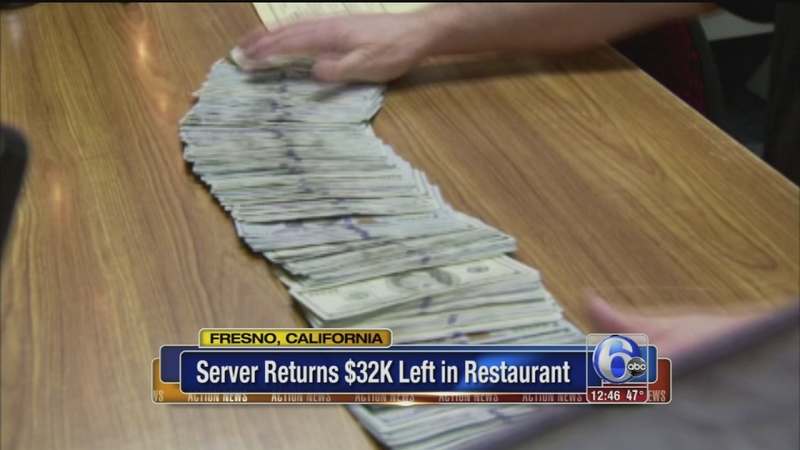 FRESNO, Calif. (WPVI) -- An Applebee's customer accidentally left a bag with $32,000 at the restaurant Wednesday night.

The server didn't want to be interviewed, but he told his managers he just did the right thing. Applebee's plans to reward him somehow, and so does the family who thought for sure that the money was long gone.

Erika and Bertha Gonzalez walked into the Fresno Police Department to find the treasure they figured no one would ever return. It took a cash counting machine to add up the $32,000 the mother and daughter mistakenly left in a booth at Applebee's.

"I think she took it out when she took out her wallet to pay and she didn't put it back in her bag," Erika said.

The two made several stops Wednesday, including a bank. They didn't originally plan on carrying the cash all day. "We were going to deposit it to the safe box and they told us they didn't have any available," Erika said.

Wednesday night, they realized the money was missing and were sick about it. The cash is savings from the family's businesses -- including rental properties and a Bay Area restaurant. "Very scared," Erika said. "I didn't know how to tell my dad."

Sammy Ashworth is the detective who first learned a large sum of money was found at the restaurant, then he got a call from the family. "They described the bag that it was in and the denomination, and I determined that, yes, it was their money," Ashworth said. "It was legally obtained, and they were just an average working family that had made a mistake and left their money behind in a restaurant."

The server who waited on the family, and also found the money didn't want to talk about his good deed. In fact, Applebee's managers aren't even sure he will take any reward from the company or the Gonzalez family. "I don't know that he would accept it honestly," Applebee's area director Carrie Hellyer said. "He's just not that guy. He made it very clear that he did it because it was the right thing to do, not that he wanted anything in return."

There are no surveillance cameras in the area where the family was seated. Applebee's says that's all the more reason this employee's integrity is remarkable. "That's a lot of money," Hellyer proclaimed. "That's more than a years salary for many of our employees and to have the knee-jerk immediate reaction to be 'let's find a way to get this back to who it belongs to,' I'm very fortunate."

The Gonzalez family plans to thank the server and police for reuniting them with their vacation money and family savings. "I am so glad they found it," Erika said. "I really appreciate it."

"I told them their next stop had better be the bank," Ashworth said. "Or at least somewhere safe where that money can be stored."