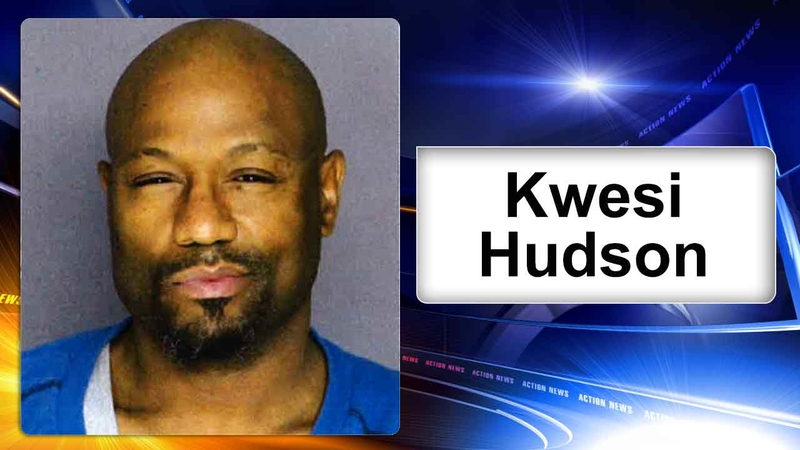 MEDIA, Pa. (WPVI) -- A robbery suspect arrested after a standoff inside a CVS drug store in Media, Pa. was arraigned Thursday morning in Delaware County.

46-year-old Kwesi Hudson, from Wilmington, Delaware, is charged with robbery and other offenses.

Watch Action Cam video of a police standoff at the CVS Pharmacy in the 200 block of East Baltimore Ave. in Media, Pa.

The incident began after 9:30 p.m. Wednesday at the CVS store in the 200 block of East Baltimore Pike.

Police say Hudson walked into the store wearing all black clothing, a hooded sweatshirt and a mask. He was holding a black handgun.

He forced employees to give him money from the register, then forced them into a rear bathroom, police said.

Before he could flee, officers arrived and surrounded the building.

After trying to escape through both the rear and front entrances, police say, the suspect locked himself in a rear storage room.

Police evacuated the employees from the store, and the Central Delco SWAT unit arrived on the scene.

JUST IN: Suspect in two hour stand off at CVS has been identified as Kwesi Hudson, 46 y.o. male, from Wilmington Delaware. @6abc

After a standoff that lasted about an hour and a half, police sway, Hudson finally surrendered.

Police say they recovered a handgun near the storage room where Hudson was hiding.

No one was hurt in the incident.

CVS released a statement Thursday morning which read, in part:

"We are grateful for the fast response of law enforcement and that no one was harmed during last night's incident. We are offering counseling services to any store employees as a result of this difficult ordeal."

Police investigate possible standoff near CVS in Media. Dann Cuellar reports during Action News at 11 p.m. on May 24, 2017.

When the store reopened for business later Thursday morning, arriving customers were surprised and saddened to learn what had happened.

"It's pretty crazy," said Natalie Cohen of Glenolden, Pa. "I didn't think anything would happen in Media."

"It's the world we live in," said Bob Ponzi of West Chester, Pa. "It's a little bit disconcerting that it has become that way. But it's the reality that we wake up with every morning."

"This is not an average night in Media," said resident Joanne Dover. "I thank the police. Thank goodness for people being able to have some sense in the middle of chaos."