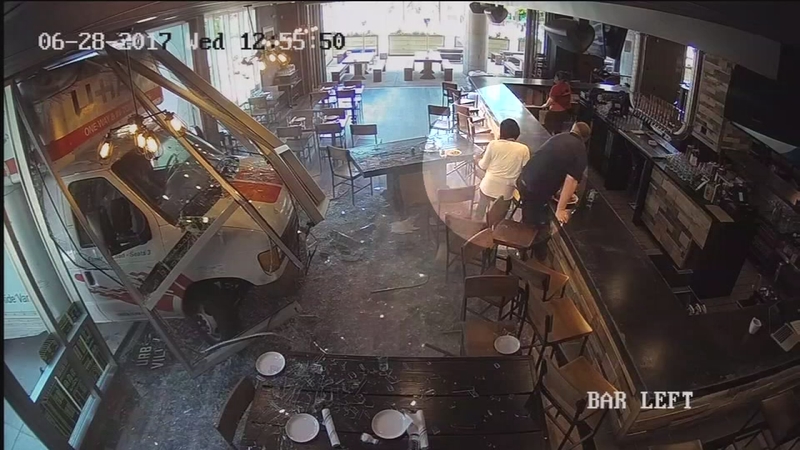 Driver in custody after U-Haul hits restaurant in NoLibs (VIDEO)

NORTHERN LIBERTIES (WPVI) -- Police say the driver of a U-Haul truck may have been under the influence when he slammed the vehicle into a restaurant in Philadelphia's Northern Liberties section on Wednesday afternoon.

It happened at the Urban Village Brewery at 1001 N. 2nd Street.

The view from Chopper 6 showed the front end of the vehicle inside the building.

Wednesday afternoon, the driver responsible for the crash is in police custody on suspicion of a DUI.

Surveillance video shows the moments when a U-Haul truck drove through the window of a Northern Liberties restaurant.

Mishel Taylor, a customer said, "It was like a tsunami, that's how I put it. It was a bunch of stuff coming at me pushing me away."

Taylor, a local realtor and friend of the restaurant owners was seated next to the window.

We spoke to her Wednesday night at her South Jersey home.

"I got up after I got pushed about 3-4 feet. I ran towards the bar, and I hit the side of the bar with my rib, and knew I couldn't go any further and closed my eyes," Taylor said.

Viewer Sean Conroy captured this pic of the suspect in today's UHAUL crash in Nolibs in custody for DUI @6abc pic.twitter.com/Px5S12v4lA

Taylor closed her eyes bracing for impact. Dashcam video caught the moments before the crash when the driver headed the wrong way on North Second Street, just before 1 p.m.

"It was a high pitched grind. Imagine when you hear it punching through cars, we were like why is it coming that way?" Kevin Ramirez of Northern Liberties said.

Co-owner of Urban Village Brewing Company Tom Revelli said, "The truck driver was the one screaming get me out of here, I'm bleeding."

The co-owners of Urban Village Brewing Company say an employee put the U-Haul in park, and they panicked searching for Taylor.

Co-owner Dave Goldman said, "I immediately was concerned where did she go? I thought she was hit by the U-Haul."

Police say the driver, a 41-year-old man, suffered injuries to his leg and was transported to Hahnemann University Hospital. He is expected to be charged with suspicion of a DUI.

Taylor says she feels lucky to be alive.

"I'm going to have a glass of wine, relax and hug everyone I love," she said.

Syringes were spotted in the front seat.

One witness spotted the invoice of the U-Haul that showed the driver rented it nine days ago.

There is no structural damage to the building, inspectors say.

Urban Village Brewing Company was back open for business in time for the dinner rush.

They had their grand opening three and a half weeks ago.