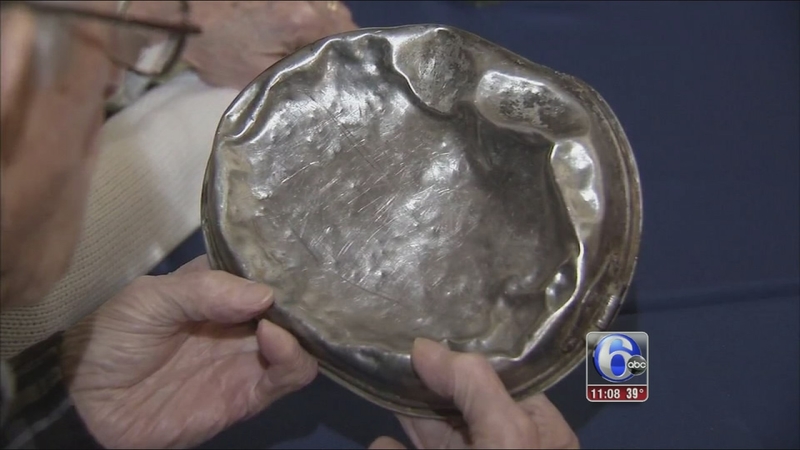 MEDFORD, N.J. (WPVI) -- A Medford, New Jersey family and a couple from England are bonded by a mess kit.

The kit belonged to Hudson Leroy Funk who served in the B Company, 330th 83rd Division during World War II.

Funk's sons were shocked when they found out the mess kit was located.

"I was called two weeks ago and I heard about Glyn finding this," son Bob Funk said.

"He said they found dad's mess kit, over in France, and I said that's hard to believe," son Leroy Funk said.

Bob Funk said they knew very little about what happened to their father other than he stepped on a land mine.

The Roxborough native lost both his legs and left behind the kit on a farm in Normandy.

"Our house is where the 83rd fought, in our garden, 3,000 bullets we've pulled out," Nightingale said.

Nightingale says it did not take long to start figuring out who it belonged to.

"As soon as we dug it out, we saw the initials, HLF," Nightingale said. "It took till just after the New Year to actually find proof that he was actually in B Company 3, 330th and that he was in Normandy."

"He and his wife have the decency and fortitude to dig into all these records and return it to their family. I'm just stunned," family friend Bob Burg of East Greenville, Pa. said.

Nightingale offered the Funks a little reminder of their father who's no longer alive to share this moment.