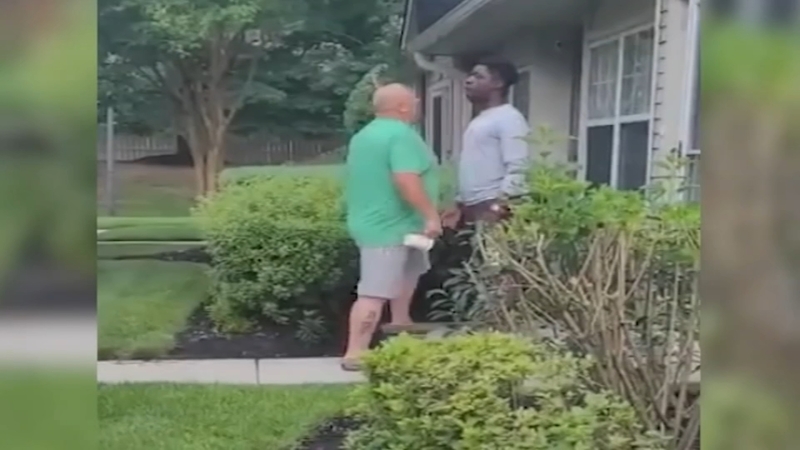 Mayor Stephen Steglik said in a statement released Tuesday that the footage is disturbing and that it speaks to a larger hate-filled divide within the country.

The mayor is furthermore calling for township council to establish a diversity and inclusion board made up of residents.

Mathews, 45, remains locked up after appearing in court Tuesday, and being taken into custody Monday following an hours-long protest outside his home.

The Burlington County Prosecutor's Office has moved to keep Mathews behind bars at least until a detention hearing that is expected to happen Friday.

His words and actions in the viral video are what ignited the outrage.

The video captured Mathews yelling racial slurs at one of his neighbors who was reportedly trying to help a couple who said they were being harassed by Mathews.

According to court documents, Mathews is accused of trying to escalate the situation.

Mathews spoke with Action News on Monday shortly before his arrest.

"I was drunk. I was out of line. I let my anger get the best of me," Mathews said.

A Mount Laurel man was taken into custody as protesters gathered outside his home over a now-viral video that shows him nonchalantly hurling the n-word at his neighbors.

Protestors have taken some of their frustrations to the front doors of the Mount Laurel Police Department and said the first officer that encountered Mathews did not do enough to stop him.

"I think if we would've never showed up, that wouldn't have happened. I think Edward would've been still sitting home comfortably in his home today had the community not actually showed up and taken action," said Shante Smith of Black Lives Matter NJ.

Residents are calling for a number of changes, which include additional officer de-escalation training and a closer look at more severe punishment for hate crimes.

"The events that have transpired in Mount Laurel have shed light upon larger systemic issues, throughout our state and country. As I have said before, the now widely seen footage involving Edward Mathews is disturbing and speaks to a larger hate-filled divide within our country.

"When words are hurled that have deep-seeded meanings followed by someone physically disrespecting someone based on their race, this should be treated as more than a random altercation. That's why I am calling for a federal hate crime investigation into Mathews' actions and words caught on video. Mathews' behavior, both physically and verbally, shows an individual with a deep seeded anger and bigotry and this must be addressed.

"Locally, we should do more to hear our residents. Last night as well as this morning, I had the opportunity to speak with residents of the Essex neighborhood and listen to their concerns and fears, not only involving Edward Mathews, but with the process that has seemingly failed them. Though I am limited in power, it does not limit my voice and desires for an improved, more inclusive community. That's why I am calling for the township council to establish a diversity & inclusion board made up of residents of Mount Laurel that will help improve our township's dialogue with communities directly.

"In addition, I believe we need to further look at the bureaucratic challenges that block us from responding the way the public deserves and should expect. We must have accountability and transparency as to why the process to get Mathews in police custody was filled with loopholes that seemingly protected a known harasser at the expense of the safety of law-abiding residents. When a judge ignores the pleas from local police to issue an arrest warrant the day of a widely reported incident despite a history of perpetual harassment, that is a problem within our system that only hamstrings our police from protecting our residents.