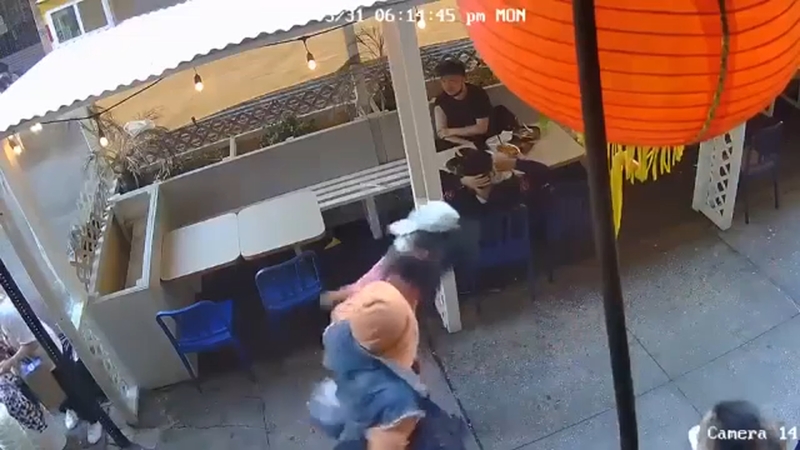 NEW YORK CITY -- A homeless man accused of sucker punching an Asian woman outside a New York City restaurant Monday has 17 prior arrests, including several for assault, according to police.

The incident happened in front of 65 Bayard Street around 6:15 p.m., when authorities say the 55-year-old woman was punched in a random and unprovoked attack.

The woman was knocked to the ground and was taken to NewYork-Presbyterian Lower Manhattan Hospital with a facial injury.

The surveillance video shows the woman get hit in the face and fall to the ground in Chinatown.

After the suspect punched that woman in the face, witnesses say he turned to the crowd gathered around and yelled, "Do you wanna fight me?"

"The victim fell to the ground on her butt and rolled back, the back of her head hit the outdoor dining frame, and she passed out," good Samaritan Jin Zhen said. "Her eyes just shut off and had no motion."

Zhen said he was ready to fight if necessary, but he instead remained calm, flagged down cops, and helped chase the man down.

"I dropped my food, if I have to get down with this guy, I have to," he said. "He came up to me and looked at me, that's when I showed him the camera, and I don't know if that aggravated him. And I was getting ready to fight for myself if I have to. He just opened his arms and said, 'She hit me. Someone hit me.'"

The suspect, 48-year-old Alexander Wright, was taken into custody nearby and is charged with assault as a hate crime, assault, and criminal possession of a controlled substance.

He was taken to Bellevue Hospital for a psychiatric evaluation.

"I have not (seen the video) but I certainly am deeply concerned," Mayor Bill de Blasio said. "We had a spate of horrible attacks against Asian Americans. They are unacceptable. We have encouraged everyone to come forward. We've got to stop Asian hate, that's the bottom line. We have a very strong Asian Crime Task Force in the NYPD, which is doing really powerful work, including undercover work, which has captured several assailants."

Police say Wright, who is homeless, was arrested on May 10 for back-to-back incidents on the Upper East Side.

First, around 10 a.m., he allegedly threw an object through the front window of Judson Reality at 1065 Madison Avenue.

Then, just before 10:30 a.m., he claimed a 36-year-old man and his family was following him before confronting the man at East 72nd Street and Madison Avenue and scratching his left eye.

He was charged with criminal mischief in the first incident and assault in the second.

"The whole problem goes back to the mayor failing the whole city here," community activist Karlin Chan said. "He is trying to mask a problem by putting the homeless into hotels. It's shameful that he is using seven hotels in this Chinatown area."

Authorities say he was also wanted for a January 17 incident for allegedly throwing a hot cup of coffee at a traffic agent and her partner at West 42nd Street and Fifth Avenue in Midtown.

He charged with that incident when he was arrested on May 10.

He was also arrested for a separate assault on July 19 in the Bronx.

"What's the common denominator?" NYPD Commissioner Dermot Shea said. "People that are arrested, multiple, multiple, multiple times and released. Mental illness is woven into this, potentially. We have to do better. And we are arresting somebody for pushing a woman down the stairs, and then we release them back into the streets. I mean, this is craziness."