Officer Ryan Allen has been on the force since 2013. He helped start Hatboro Police Department's first police K9 program.
WPVI
By Dann Cuellar 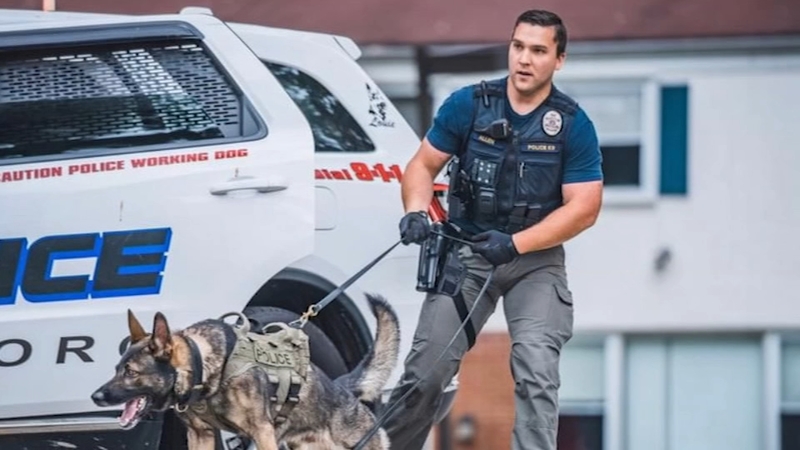 HATBORO, Pennsylvania (WPVI) -- A Montgomery County community is banding together to support a police officer who is still recovering from a bee sting that's left him incapacitated.

Officer Ryan Allen has been on the force since 2013. He helped start Hatboro Police Department's first police K9 program.

"He wanted to be a K-9 officer since he was a young child. He is so dedicated to the community and the other K9 officers," said Whitney Allen, the officer's wife.

Back on October 14, Officer Allen had a severe reaction after being stung by a bee. He suffered a heart attack which led to a brain injury.

Since then, he has been incapacitated.

"He's in what they call a 'disorder state of consciousness.' He's out of the coma, but he's not aware of his surroundings," said Whitney Allen.

Officer Allen's wife was there when it happened, and started chest compressions until the ambulance arrived.

Officer Allen is being treated at Moss Rehab.

"They can't tell us what the prognosis is, and we don't know either. We just know that the next couple of months are gonna be very critical," said his wife.

Officer Allen was in the hospital when his second son Leo was born and he has not had a chance to meet him due to Covid restrictions.

His family is hoping and praying to get him home as soon as he's strong enough.

"We're trying to build an addition where we could have a nice private space for Ryan to be with hopefully a nurse," said Whitney Allen.

She says insurance will only pay for a portion of the skilled nurse care he will need.

Whitney has set up a GoFundMe account hoping to raise $200,000 to help pay for her husband's return home.