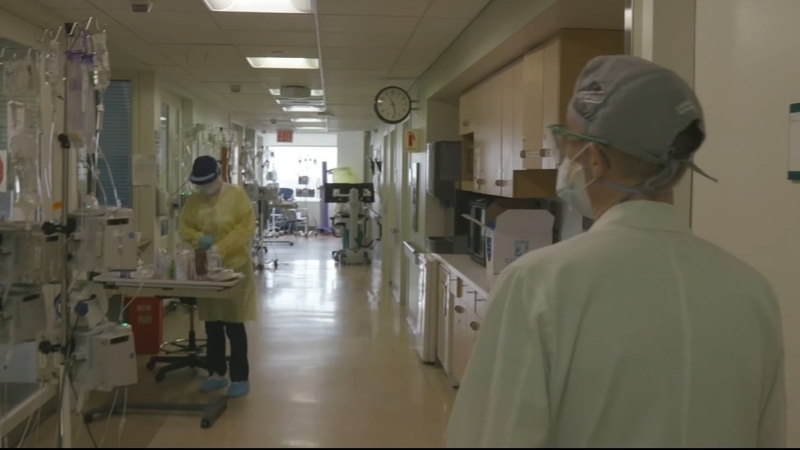 As the residents reflect one year later, the county's vaccination site is buzzing with activity and people anxious to be vaccinated.

The Patels, from Sewell, New Jersey, received their first dose of the Moderna vaccine Thursday at Camden County College after staying up until midnight looking for an appointment.

"Last night, we tried to book at midnight," said Khodadhal Patel, sitting in the observation area with his wife.

In April last year, three of his household family members contracted COVID-19. He says it was a scary time when there was still much they didn't know about the virus.

He says he quarantined his wife and children to prevent them from becoming infected.

"I just locked up in my room. Didn't go out for a week," said Patel.

They have all since recovered.

"A year ago, we knew that we would have to prepare our state and each of you for the worst and hope for the best. None of us could even imagine what it was we ultimately would be up against," said Murphy.

The coming months brought a mad dash for PPE and testing kits.

In a year, more than 21,000 deaths in New Jersey have been attributed to COVID-19. More than 1,000 of those deaths have been in Camden County.

"It was just an all-out war against this virus," said Commissioner Director Louis Cappelli, Jr. thinking back to last March. "An all-out effort to help our residents as much as we could."

Capelli says the county now has its own stockpile of PPE and a hospital tent.

While vaccine distribution is going well, he urges residents to be careful.

"Right now, there's a race between the vaccines and the variant viruses out there. Who's going to win over the population? So we need to stay safe," Capelli added.

Erin Tyson, a psychiatric social worker with Virtua Health, says the past year has also taken a mental and emotional toll.

She says one of the hardest-hit populations has been children and adolescents.

Her advice to parents and caregivers: "Have an empathetic ear to hear where they are at with this. Sometimes I think we struggle to put ourselves in our children's shoes because we're all struggling with the change ourselves and just talking with them," said Tyson.

Tyson also encourages all of us to check in on loved ones, even if it's having a virtual dinner or coffee.
Report a correction or typo
Related topics:
societygloucester townshipsocietycommunitycovid 19 pandemic
Copyright © 2022 WPVI-TV. All Rights Reserved.
TOP STORIES
Boy, 11, suffers burns during bonfire explosion
Relief coming for residents enduring deafening steam plant noise
Son of Philly police officer shot, killed during apparent robbery
Another volatile day on Wall Street. Is it time to worry?
AccuWeather: Back to the 40s Tuesday
Officials ID victim killed in Montco crash; 4 others seriously injured
Mayor Kenney to undergo heart procedure Tuesday
Show More
Getting paid on Venmo or Cash App? New tax rule might apply to you
Philly sees more graffiti during COVID, but artists say it's an outlet
Tax season officially begins. Here's everything you should know
Introducing Millville, New Jersey's first female mayor
Dad charged and fired from job after racist tirade posted on TikTok
More TOP STORIES News